Today, the Province of Saskatchewan remembers those who perished during the Ukraine famine in 1932-1933.  Holodomor Memorial Day is recognized nationally on the fourth Saturday of November and this year falls on November 28. 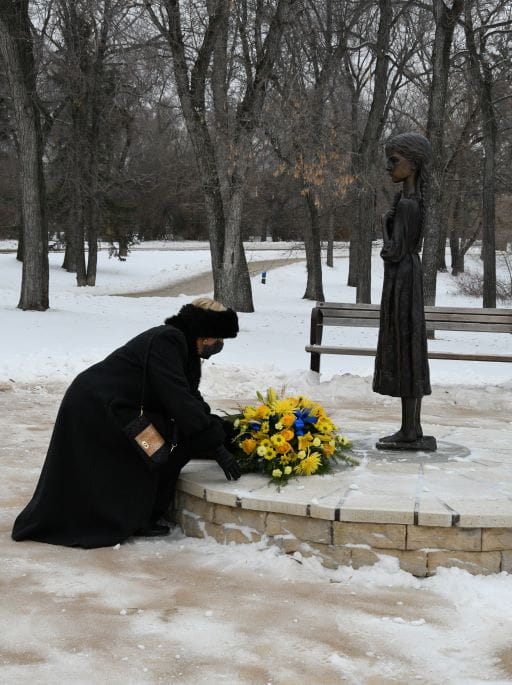 “It is important to recognize historical tragedies like Holodomor, to honour those who have suffered and those who were lost,” Saskatchewan-Ukraine Relations Liaison Nadine Wilson said.  “By remembering the history of Ukrainians and shining light on their stories, we grieve the mistakes of the past and move forward embracing the Saskatchewan value of inclusion.”

This year, due to COVID-19, a private memorial took place outside the legislative building.  Ms. Wilson laid flowers in honour of the victims of Holodomor at the foot of the memorial statue in Wascana Park.  The statue, an exact copy of Petro Drozdowsky’s “Bitter Memories of Childhood” statue, is a permanent reminder of this tragic genocide and was erected in Wascana Park in 2015.

In 1932-1933, the Soviet Union imposed a man-made famine that led to the untimely death of an estimated 10 million people.  Crops were seized in the midst of a record harvest and people were prohibited from leaving their communities in search of food.  Holodomor means “extermination by hunger” in Ukrainian.

Saskatchewan was the first jurisdiction in North America to recognize this genocide with the passing of The Ukrainian Famine and Genocide (Holodomor) Memorial Day Act in 2008.