Fluctuation in daily case numbers can be expected, as a result of factors including weather-related and logistical delays in lab specimens reaching the Roy Romanow Provincial Laboratory.  The seven-day average of daily cases is 211 (17.4 new cases per 100,000 population), information which will be now be regularly reported.

Three cases with pending residence information from November 14 and 20 were assigned to the Far North West (1), North Central (1) and Regina (1) zones.

Ninety-nine people are in hospital.  Eighty people are receiving inpatient care; one in the Far North West, eight in the North West, nine in North Central, one in North East, 33 in Saskatoon, one in Central East, eight in Regina, one in South West, one in South Central and 17 in the South East zone.  Nineteen people are in intensive care: two in North Central, 10 in Saskatoon, one in Central East, two in South West and four in Regina. 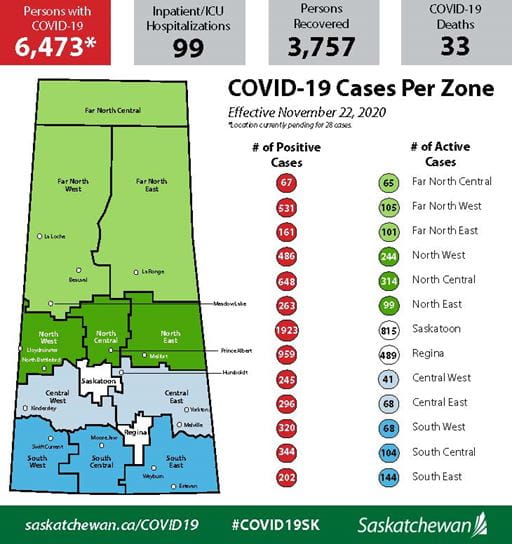