“Infrastructure investments are important for growth, quality of life, and safe transportation,” Highways and Infrastructure Minister Greg Ottenbreit said.  “This stimulus package will provide an economic boost creating jobs and building priority infrastructure projects which will serve the citizens of the province for decades to come.”

The $300 million in highways stimulus funds will be invested over the next two years as we work to quickly re-start the Saskatchewan economy.  These projects will include thin-membrane surface upgrades, passing lanes and improvements to municipal roads and airports. 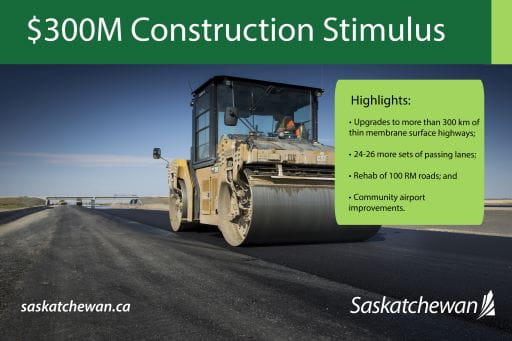 “Provincial road builders generate more than $5 billion in provincial GDP out of an economy of $73 billion or roughly seven per cent of the total provincial economy,” Saskatchewan Heavy Construction Association President Shantel Lipp said.  “We employ close to 30,000 workers, making our industry one of the largest employers in the province.  We welcome any move toward maintaining and eventually growing these job numbers to get our economy on track.”

These stimulus investments are on top of $358 million in capital projects already committed in this year’s Estimates including:

This year’s fiscal plan also includes improvements to more than 1,000 km of provincial highways this year, which is the first year of the 10-year Growth Plan to build and upgrade 10,000 km of highways.