Jobs continued to grow in February for the 19th consecutive month.  Saskatchewan saw an increase of 4,900 jobs over February 2019, with 569,700 people employed, a record high for the month of February.

“Despite the significant economic headwinds facing the province, we continue to see strong, steady job growth in Saskatchewan,” Immigration and Career Training Minister Jeremy Harrison said.  “Our government will continue to stand up for Saskatchewan families and work hard to ensure our province and economy remain strong.” 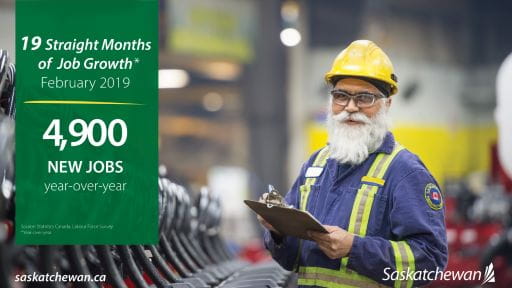 The seasonally adjusted unemployment rate was 6.2 per cent.

Other February highlights:
• Saskatchewan hit record high levels for the month of February for labour force (607,500) and full-time employment (460,600).
• Full-time employment increased by 3,100 jobs and part-time positions increased by 1,900 jobs from last February.
• Major year-over-year gains were reported for manufacturing (up 3,800 jobs), educational services (up 3,800 jobs) and information, culture and recreation (up 2,600 jobs).