Lithium exploration and development are coming to Saskatchewan, thanks to a new joint lithium project undertaken by Prairie Lithium Corp. (Prairie) and LiEP Energy Ltd. (LiEP).

The two companies started the Prairie-LiEP Critical Mineral (PLCM) Joint Venture, a two-stage pilot project that will produce lithium hydroxide from Saskatchewan oilfield brines.  The first stage is expected to begin this July, based in Regina, and the second stage is planned for the second half of 2021, with field operations in southern Saskatchewan.

“This is another exciting development that promotes economic diversification in Saskatchewan,” Energy and Resources Minister Bronwyn Eyre said.  “Lithium has great potential, due to increasing world-wide demand, which is why supporting extraction technologies and a viable lithium sector are included in Saskatchewan’s Growth Plan.”

“The lithium industry has the potential to be another significant economic driver and help our province through economic recovery,” Trade and Export Development Minister Jeremy Harrison said.  “We are pleased to welcome this new project to our province and look forward to the future opportunities it will bring for our residents.” 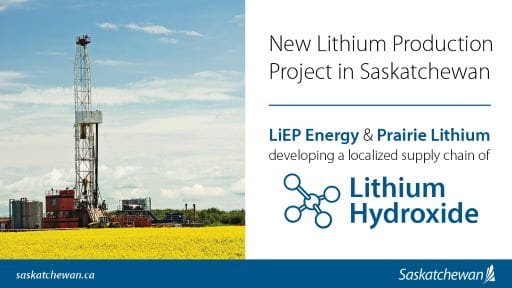 The PLCM Joint Venture project has been conditionally approved by the Ministry of Energy and Resources under the Saskatchewan Petroleum Innovation Incentive (SPII).  The project will be eligible to earn transferrable royalty credits worth 25 per cent of eligible capital and operating expenditures.

The SPII program targets a broad range of innovations deployed across all areas of Saskatchewan’s oil and gas industry, including for lithium.  The program is open to pilot projects and commercial scaling projects, providing applicants the opportunity to test their innovations in a pilot setting, then deploy them on a larger commercial scale.

“PLCM Joint Venture is excited to begin stage one of the pilot operation in Saskatchewan this summer,” Prairie and LiEP’s President and CEO Zach Maurer and CEO Haafiz Hasham said.  “The province has been great to work with and is committed to diversifying the economy through innovation.  We believe that Saskatchewan has the potential to be a global player in the production and chemical processing of lithium, and both companies are thrilled to be working toward proving that potential.”

Stage one of the project will produce 1 to 1.75 kilograms (kg) of lithium hydroxide per day.  Stage two will include the construction of one of Canada’s first lithium extraction and refining facilities, which will produce approximately one tonne of lithium hydroxide per day, resulting in 365 tonnes per year.  This will serve as a demonstration plant prior to full commercialization.  The entire process from raw brine to refined lithium product is anticipated to take under six hours, which is a vast improvement on the current industry standard of 18 months.

The global demand for lithium is forecasted to grow by ten per cent, per year, between 2019 and 2024 due to the expanding use of rechargeable lithium ion batteries in electric cars and portable electronic devices.  Lithium is identified as a critical mineral in the Canada-US Joint Action Plan on Critical Minerals Collaboration, as it has important applications in other advanced and clean technologies.

Batteries represent up to 45 per cent of the lithium market, but it is also used to produce glass and ceramics (up to 30 per cent) or greases and lubricants (up to 10 per cent).  Both parties are working with the Government of Saskatchewan and will ensure that necessary environmental processes and other needed permits are completed through to commercialization.