Today, the Government of Saskatchewan announced $31 million in funding for a Rare Earth Processing Facility in Saskatchewan – delivering on a key element of the 2030 Growth Plan.

The facility will be owned and operated by the Saskatchewan Research Council (SRC).  It will be the first-of-its-kind in Canada and will begin to establish a Rare Earth Element (REE) supply chain in Saskatchewan, forming an industry model for future commercial REE resource expansion in the province.  REE metals are naturally occurring minerals that are essential to the modern global economy and economic development.

Global demand for REEs will increase significantly in the coming decade as demand for electric vehicles, renewable power generation and all forms of electronics increases. 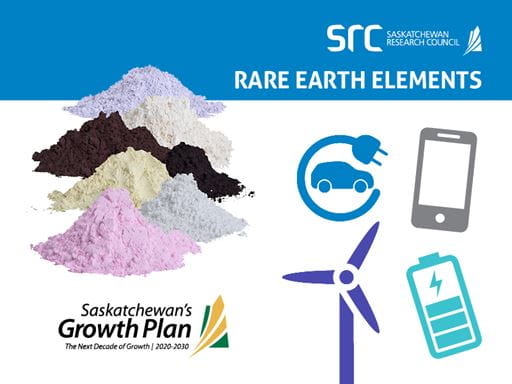 “Saskatchewan’s new Rare Earth Processing Facility will be a catalyst to stimulate the resource sector in Saskatchewan and across Canada, providing the early-stage supply chain needed to generate cash-flow, investment and industrial growth of the sector,” Premier Scott Moe said.  “It will also help ensure the competitiveness of Saskatchewan as we focus on our economic recovery and grow our province over the next decade.”

“Saskatchewan has a globally recognized mining industry, workforce and culture with local companies already beginning to explore REE deposits both in Saskatchewan, and in surrounding provinces and territories,” Minister Responsible for SRC Jeremy Harrison said.  “This facility will allow the REE industry to grow and create both immediate and long-term jobs.”

The conversion of REE ore to individual REE products is done in two main stages.  The first is the concentration of ore to mixed REE Carbonate.  The second is the more complex separation stage that converts the mixed REE Carbonate to commercial pure-grade REEs.  The facility will address both stages of REE processing.

The facility is expected to be fully operational in late 2022 with construction beginning this fall.

SRC is Canada’s second largest research and technology organization.  With more than 290 employees, $91 million in annual revenue and nearly 75 years of experience, SRC provides services and products to its 1,500 clients in 27 countries around the world.  More information at http://www.src.sk.ca/REE.