The Government of Saskatchewan is investing more than $6.7 million for facility and infrastructure improvements in central and northern provincial parks in 2020-21. A total investment of $14.6 million will be made across Saskatchewan’s provincial parks system this year.

“As provincial parks continue to be popular vacation destinations for Saskatchewan families, maintaining and improving our parks is an ongoing priority for our government,” Parks, Culture and Sport Minister Gene Makowsky said.  “Each year, millions of dollars are invested into our park facilities and infrastructure to ensure visitors can enjoy access to modern and safe amenities while spending time in provincial parks.” 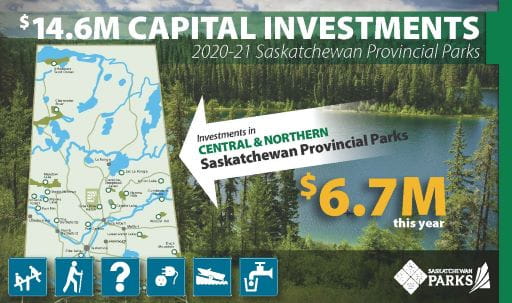 Along with ongoing improvements to washrooms, docks, day-use facilities and signage, upgrades scheduled for completion prior to the 2021 camping season in central and northern Saskatchewan provincial parks include:

Upgrades that began in 2019-20 and are now complete in central and northern Saskatchewan provincial parks include:

Saskatchewan’s provincial parks continue to be an important destination, attracting visitors and bringing economic benefits to the province.