Unemployment fell by 2.8 per cent to 8.8 per cent (seasonally adjusted), the second-lowest among provinces.  Saskatchewan now has the second-highest employment recovery rate in the country at 94.9 per cent compared to February, the last month before the pandemic. 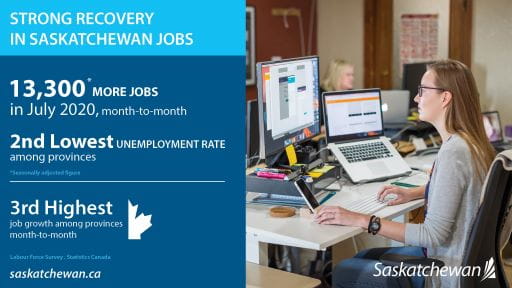 “Saskatchewan continues to see positive effects resulting from the Re-Open Saskatchewan plan, as the province’s job growth remains one of the highest in Canada,” Immigration and Career Training Minister Jeremy Harrison said.  “This means that many residents of Saskatchewan have been able to safely return to the workforce as our economy is on the right path for a strong recovery.”

The Canadian Federation of Independent Business (CFIB) Business Barometer Index continues to indicate that Saskatchewan’s business climate remains strong, with a year-over-year index increase of 4.0 points from July 2019, compared to a 3.5 point increase in the national index.  This is the third largest increase among provinces.

Also, Saskatchewan’s average weekly earnings increased by 2.3 per cent in May compared to the previous month, which was the second highest among provinces and above the national increase of 2.0 per cent.