The Government of Saskatchewan is supporting Wanuskewin Heritage Park’s application to become a UNESCO World Heritage Site by providing access to additional lands with a signed Memorandum of Understanding (MOU).

“Good relations and developing partnerships are important to the Government of Saskatchewan,” Highways and Infrastructure Minister Greg Ottenbreit said.  “This parcel of land will serve the future Saskatoon Freeway, while lands not required for the infrastructure can support Wanuskewin Heritage Park and their conservation efforts.”

As part of the MOU, the government is providing Wanuskewin with interim access to land acquired while planning is underway for the Saskatoon Freeway.  Once the land requirements for the freeway are determined, arrangements will be made to provide access to land not needed for the freeway on a long-term basis.  While there are no timelines for construction of the Saskatoon Freeway, the land was recently purchased by the government from a willing seller. 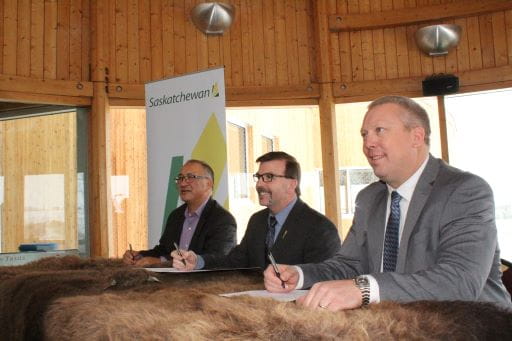 Functional planning for the project is underway which will help finalize the route within the corridor, prepare cost estimates, while engaging stakeholders.  The ongoing development and promotion of institutions such as Wanuskewin Heritage Park are important for tourism development and fostering education and respect for Indigenous culture, heritage and arts.

“Wanuskewin Heritage Park has been and will continue to be an important part of our province,” Parks, Culture and Sport Minister Gene Makowsky said.  “This is a great first step toward supporting Wanuskewin’s application to become a United Nations Educational, Scientific and Cultural Organization (UNESCO) World Heritage Site.”

As a way to heighten the experiences of visitors, preserve and protect natural surroundings, and promote international collaborations in education, sciences and culture, Wanuskewin Heritage Park is currently looking for UNESCO designation.

“The UNESCO World Heritage process will require demonstrated partnerships with all of our stakeholders as well as an adequate buffer zone,” Wanuskewin Heritage Park Chair Felix Thomas said.  “The signing of this MOU is another step in our continued collaboration with the Province of Saskatchewan.  We are grateful for their commitment to moving forward with Wanuskewin toward this world class designation.”