Trade and Export Development Minister Jeremy Harrison will be advocating for trade and improved market access for Saskatchewan exports, and highlighting investment opportunities, during a trade mission to India November 16-23.

“India is the world’s second-most populous country, with rapidly growing needs for food, fuel and fertilizer and Saskatchewan is well-positioned to help meet those needs,” Harrison said.  “Saskatchewan’s major exports to India have increased in the first eight months of this year compared to 2018, and we know there are further opportunities to improve market access for Saskatchewan products.”

Harrison will make stops in New Delhi and Mumbai during his first trip to the country.  During his mission, he will participate in the Indo-Canadian Business Chamber Annual National Convention in New Delhi and the Canada-India Business Council Mumbai Forum, in addition to meeting with representatives from the Indian government and industry. 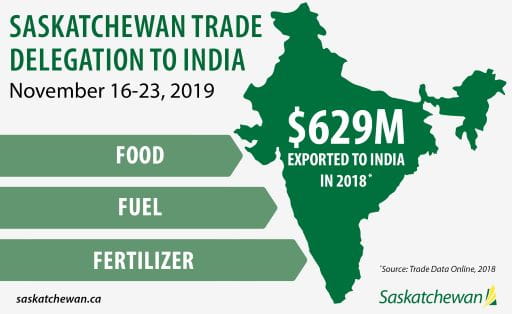 “India is normally one of the largest export markets for Canadian pulses, accounting for up to 40 per cent of total red lentil and yellow pea exports,” Saskatchewan Pulse Growers Chair Brad Blackwell said.  “Saskatchewan pulse growers need improved transparency and predictability in India’s trade policies, so we are supportive of the Government of Saskatchewan’s efforts to seek improved market access for Canadian pulses to India.”

“Positive government-to-government relationships are becoming increasingly important in the ability of companies to do business in many of the world’s emerging markets, including India,” Cameco President and CEO Tim Gitzel said.  “As we work to grow Cameco’s sales of Canadian uranium to India’s nuclear energy sector, we see real value in the engagement that is done by the Saskatchewan government and try to participate in trade missions of this nature whenever we can.”

Saskatchewan has been one of Canada’s top exporters to India for the past decade, exporting mostly agricultural commodities and mineral products.  In 2018, the province exported $629 million in goods to India, including potash, pulse crops, uranium and semi-chemical wood pulp.