The first auctions for available retail liquor store permits in Saskatchewan begin November 27 with bids closing on December 6.  Communities included in the first round of auctions are Estevan, Martensville, Melfort, Weyburn and Warman.

“We have received a fair amount of interest since first announcing the population-based policy to allocate additional liquor permits earlier this year,” Minister Responsible for the Saskatchewan Liquor and Gaming Authority Gene Makowsky said.  “The online auction process is a way to allocate the permits efficiently and transparently so that new permittees can complete the application process and open for business in a timely manner.” 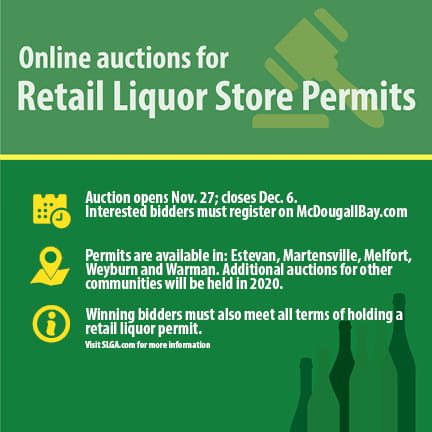 An auction will only occur if someone expresses interest in a community where there is an available retail store permit.  The winning bidder must also meet all terms associated with holding a liquor permit.

The current auction will open on November 27 and will close December 6.  Interested bidders are required to register at www.McDougallBay.com, which is the website where all bidding will take place.  Each auction will have an opening bid of $1,000.

More information about the auction process can be found at www.slga.com.  Further auctions will be held over the next few months until all current expressions of interest are addressed.

After the initial rounds, auctions will take place on a quarterly basis, if interest is expressed in a community where there is at least one available permit.