The wait is over!  Scotty’s spectacular second home, the CN T.rex Gallery is now open to the public at the Royal Saskatchewan Museum (RSM).

“This is an exciting moment for our province,” Parks, Culture and Sport Minister Gene Makowsky said.  “We are thrilled to have a new attraction that will draw visitors to Saskatchewan from near and far.  The new CN T.rex Gallery was made possible by the hard work of RSM scientists, programming and exhibits staff and many construction crews.  Financially, this project has been supported by the Province of Saskatchewan, the Government of Canada, CN and various donations from the public.”

Two significant sponsors are to thank for the introduction of this new gallery, the Government of Canada provided $472,000 through the Canada Cultural Spaces Fund and CN is a major sponsor with naming rights to the gallery.
“The Royal Saskatchewan Museum has been an icon in our community for as long as almost any of us can remember,” Canada’s Minister of Public Safety Ralph Goodale said.  “It is the perfect place to showcase the largest meat-eating dinosaur ever found in Scotty's home province.  We’re proud to support this anchor attraction in Regina.” 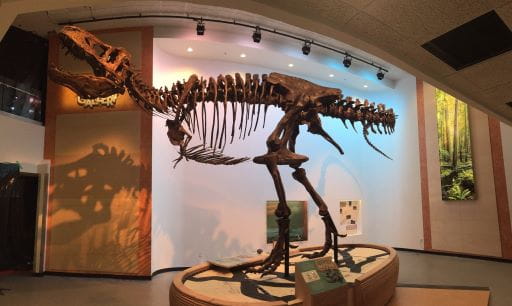 Visitors will now be able to understand Scotty’s massive size as he towers through the two-level gallery.  Scotty is the most massive T.rex ever found and more massive than any specimen of any other meat eating dinosaur ever found.

The CN T.rex Gallery will include an opportunity to hear Scotty’s roar as an adolescent and adult, there will be five interactive text panels to show a variety of Scotty’s injuries, visitors will be introduced to the smallest T.rex specimen, and there will be a predator or scavenger exhibit that includes fossilized teeth from Scotty and other meat eaters.

Scotty’s history dates back to August 16, 1991, when Scotty’s fossilized remains were found in the Frenchman River Valley, near the town of Eastend, Saskatchewan (383 kilometres east of Regina).  In June 1994, palaeontologists, including RSM palaeontologist Tim Tokaryk and other RSM staff, began the long excavating and exhibiting process for an exact copy of Scotty to be displayed.

For more information on the Scotty exhibit in Eastend or Regina, programming at the museum or to learn more about supporting the RSM’s world class work, visit https://royalsaskmuseum.ca/, Facebook @Royal.Saskatchewan.Museum, Twitter at@royalsaskmuseum or Instagram @RoyalSaskMuseum.  Visit. Donate. Discover.