Two men recently pleaded guilty in a Yorkton Provincial Court to wildlife charges of hunting under the influence of marijuana.

During a patrol in September 2018, Ministry of Environment conservation officers from Duck Mountain discovered two men in a vehicle parked on Wildlife Development Fund lands near Calder, SK.  The lands were clearly posted as “foot access only.”

As officers approached the vehicle, they detected a strong odour of burning marijuana.  Upon conducting a hunter compliance check, the officers located an unspecified amount of marijuana and a loaded firearm inside the vehicle.

Yorkton residents Timothy Eashappie, 37, and Colby Barnhardt-Peepeetch, 20, were charged with hunting under the influence of a narcotic and being in possession of marijuana.

Eashappie was also charged with driving with a suspended licence and operating a vehicle on Wildlife Lands.  He received a total of $1,250 in fines.

Barnhardt-Peepeetch was also charged with having a loaded firearm in a vehicle and fined a total of $1,480 for his violations. 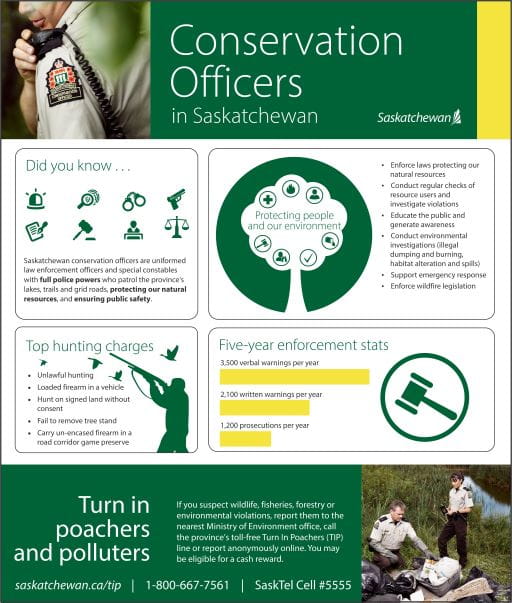 Hunters are reminded that being under the influence of alcohol or narcotics is illegal and extremely dangerous when firearms are involved.  Also, Fish and Wildlife Development Fund lands are only accessible by foot, as motor vehicles are not permitted on these lands.

If you suspect wildlife, fisheries, forestry or environmental violations, please call Saskatchewan’s toll-free Turn In Poachers line at 1-800-667-7561, or call #5555 (SaskTel cellular subscribers), or report a violation online at www.saskatchewan.ca/tip.  You may be eligible for cash rewards from the SaskTip Reward Program.