Thanks to good seeding conditions, Saskatchewan producers made up the time lost in previous weeks.  Thirty-five per cent of the crop is now in the ground, just ahead of the five-year (2013-2017) seeding average of 32 per cent for this time of year.  Crops are starting to emerge.

Rain showers were reported throughout the province, particularly in the southwestern and west-central regions.  The Gull Lake area received 18 mm of rain, the most in the province.  There have been multiple reports of grass and stubble fires due to the dry conditions and rain would be welcomed to help alleviate dry field conditions and concerns. 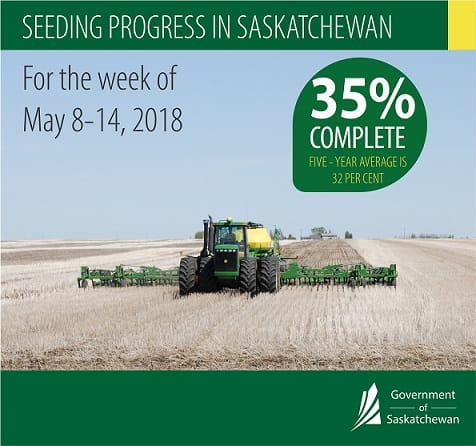 SaskPower reports 46 cases of farm machinery contacting electrical equipment in the last week, bringing the total for May to 73. Most farm-related incidents happen during seeding.  SaskPower reminds producers to be aware of their surroundings at all times and to plan ahead.  More safety information is available at www.saskpower.com/safety.

A complete, printable version of the Crop Report is available online at http://www.saskatchewan.ca/crop-report.