Premier Scott Moe is calling for changes to Canada’s equalization program, which has seen Saskatchewan receive zero over the past 11 years while Quebec has received $100 billion.

“Equalization is an incredibly inequitable and flawed program, which has seen provinces like Saskatchewan, Alberta and Newfoundland receive zero year after year, even through the economic downturn in the resource sector,” Moe said.  “Meanwhile, other provinces continue to receive billions every year.  That means our taxpayers continue to pay for programs and services in other provinces, even when those other provinces’ economies are strong.”

Moe has written to Prime Minister Trudeau and the other nine provincial premiers to propose a simple change to the complicated equalization formula that would make equalization fairer.

Moe calls his proposal the 50-50 Formula.  Under this formula, the overall amount of equalization and relative fiscal capacity of each province would continue to be calculated in the same manner it is now, using the same revenue sources.  Half of the total equalization pool would be distributed on this basis. 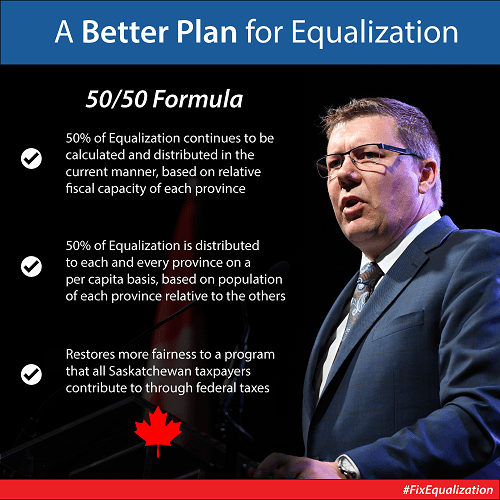 Even under this proposal, the benefit to Saskatchewan remains quite small.  Saskatchewan would receive about $300 million, or about 1.6 per cent of the overall equalization amount.

“As Saskatchewan has not received one dollar of the $177 billion in equalization paid out over the past 11 years and is not expected to receive any equalization payments for the foreseeable future under the current formula, I would contend that this proposal is more than reasonable in terms of its benefit to our province,” Moe said.

Below is a table showing how 2018-19 equalization payments would have been distributed using the 50-50 formula.

Moe is requesting that a discussion about equalization be added to the agenda of the upcoming meeting of Canada’s Premiers in July.