The first public offering of Crown petroleum and natural gas rights for the 2018-19 fiscal year raised $2.9 million in revenue for the province on Tuesday, which is approximately double the amount raised in the April public offering in 2017.

“There are clear indicators of renewed activity taking place in Saskatchewan’s oilpatch, which is home to some of the most cost-effective plays in North America,” Energy and Resources Minister Bronwyn Eyre said.  “Predictable policies and accessible resources make this province an attractive destination for the oil and gas industry, and we intend to keep working to make it even better.”

Saskatchewan’s petroleum sector continues to demonstrate clear signs of growth.  The value of the province’s total oil production for 2017 significantly increased over the value for 2016, rising from $6.9 billion to $9.2 billion.  As well, there was an estimated $4 billion of investment in new exploration and development by the oil industry for 2017.  This was up 42 per cent from the previous year’s figure—an indicator of sustained interest and confidence from the industry, as well as market optimism. 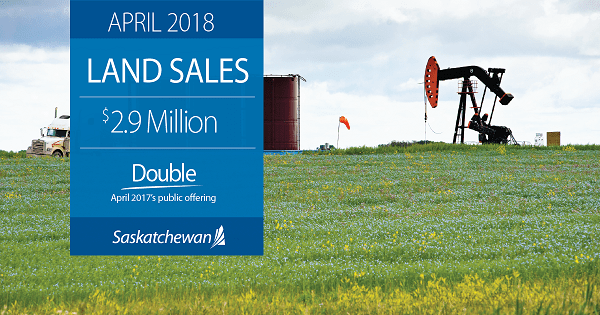 Year-over-year employment in the sector has also grown: there were almost 34,000 direct and indirect person-years of employment in the upstream oil and gas industry forecast for 2017, up seven per cent from 2016.

In the Fraser Institute’s Annual Global Petroleum Survey in 2017, Saskatchewan ranked seventh out of 97 jurisdictions in the world, and second in Canada, in terms of overall attractiveness for oil and gas investment, and has consistently been among the top 10 over the past six surveys.

The oil and gas industry is responsible for an estimated 15 per cent of Saskatchewan’s gross domestic product.  One lease north of St. Walburg received a bonus bid of $1,111,916.78 for 129.500 hectares.  This lease was purchased by STOMP Energy Ltd. and is prospective for oil in the Mannville Group.  One of the exploration licences, located north of Shaunavon, was prospective for oil in the Upper Shaunavon while the other, located near Consul was prospective for gas in the Second White Specks.  Both exploration licences in southwest Saskatchewan received bonus bids totalling $540,831.52.

The next public offering of petroleum and natural gas rights will be held on June 5, 2018.