St. Lorenzo Ruiz Catholic School celebrated its grand opening today with an energetic gathering in the school gymnasium.  Saskatoon University MLA Eric Olauson, on behalf of Education Minister Bronwyn Eyre, joined students to unveil the plaque that will be displayed in the school's entrance and cut the ribbon to officially mark the opening of the school.

“Our government welcomes all of the students and staff to St. Lorenzo School,” Olauson said.  “There is a growing demand for Catholic education in northwest Saskatoon and high enrolment affecting area schools, making this opening an exciting moment for residents in and around Hampton Village.   I would like to congratulate all of the students and staff at St. Lorenzo Ruiz School. ”

“Never before has a school division in Saskatchewan opened six schools at the same time, so it’s exciting, and maybe a bit stressful, to be part of that history,” Greater Saskatoon Catholic Schools’ Board Chair Diane Boyko said. “It’s evident that the people of Saskatoon, and all of Saskatchewan, want Catholic education, and we’re proud that parents entrust us with the task of educating their children and building faithful disciples of Christ.”
More than 400 students are enrolled in St. Lorenzo Ruiz Catholic School.

“Hampton Village is such a great community, and it’s an honour to be a part of its growth and maturation as an educator,” St. Lorenzo Ruiz Principal François Rivard said.  “Families have watched the school being built for years, and now they finally get to walk through the doors and be part of building a strong, faith-filled school community together.  There are lots of smiling children and parents.” 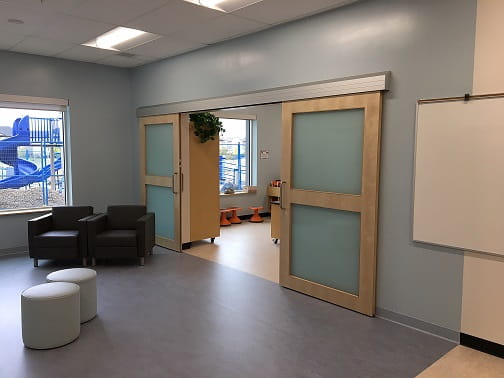 Like all 18 schools, St. Lorenzo Ruiz features flexible learning spaces that accommodate a variety of learning styles, such as sliding barn doors that can turn individual classrooms into larger multipurpose spaces, creating more room for programming.  The spaces are bright and airy, and inspire creativity and collaboration among students and teachers.

Since 2007, the Government of Saskatchewan has committed approximately $1.5 billion toward 67 major school capital projects and numerous smaller projects such as portable classrooms and preventative maintenance and renewal.