Man Ordered to Pay More Than $41,000 for Starting Wildfires

A Hall Lake man was recently sentenced in La Ronge provincial court for intentionally lighting several fires on the outskirts of his community.

On July 4, 2015, while massive wildfires threatened La Ronge and other northern communities, the Ministry of Environment received a report of a wildfire near the community of Hall Lake, 100 kilometres west of La Ronge.  Responding firefighters found several wildfires, which were quickly contained.  An investigation determined that the fires had been deliberately set in four separate locations along a trail west of the community.

Conservation officers identified a suspect who confessed to flicking lit wooden matches into the forest as he was walking along a trail back to town. 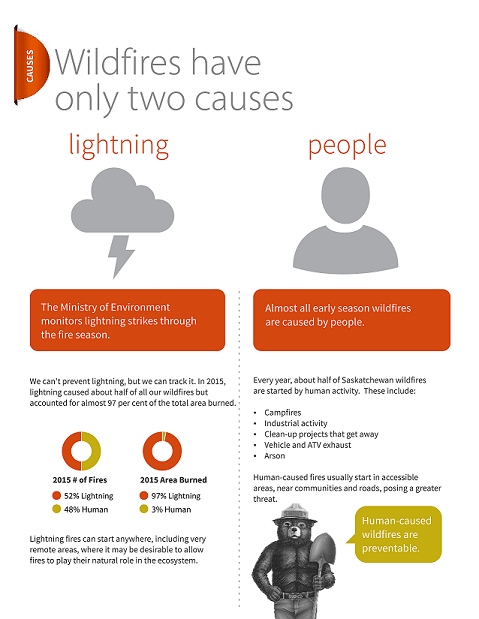 Donald Halkett Jr., 22, pleaded guilty to mischief under the Criminal Code of Canada, as well as failing to comply with a fire ban under The Wildfire Act.

Halkett received a six month conditional sentence on the mischief charge, with conditions including a curfew, not to consume or possess alcohol, 100 hours of community service and a $100 surcharge.  He also received a $250 fine for starting a fire during a fire ban and was ordered to pay $41,392.83 in restitution for the costs to extinguish the fires.

Anyone who lights a fire is responsible for all resulting damages and suppression costs, which can be significant.  Diverting firefighting resources to respond to human-caused fires, particularly during extreme wildfire activity and burning conditions, can put communities and firefighters at risk.

If you suspect wildlife, fisheries, forestry or environmental violations, please call your local Ministry of Environment office, Saskatchewan’s toll-free Turn In Poachers line at 1-800-667-7561 or #5555 for SaskTel cellular subscribers, or report a violation online at www.saskatchewan.ca/tip.  You may be eligible for cash rewards from the SaskTip Reward Program.