The Government of Saskatchewan has proclaimed November 12-18, as Bullying Awareness Week in Saskatchewan.  This year’s theme is Stand Up! (to bullying).

During Bullying Awareness Week students, school staff and parents are encouraged to learn more about the issues of bullying and work together to prevent it in communities and schools through education and awareness.

“It’s important for all of us in Saskatchewan to stand with those who experience bullying so they know they’re not alone,” Education Minister Bronwyn Eyre said.  “Bullying Awareness Week serves as an important reminder that there are resources here in Saskatchewan to support children and youth.”

The Ministry of Education and SaskTel continue to work together through I Am Stronger on bullying and cyberbullying prevention.  On the program’s website at http://iamstronger.ca/, students will find information on how they can get help.  They can also anonymously report bullying online from a smartphone, tablet or computer.  There are resources on bullying prevention for youth, families and educators. 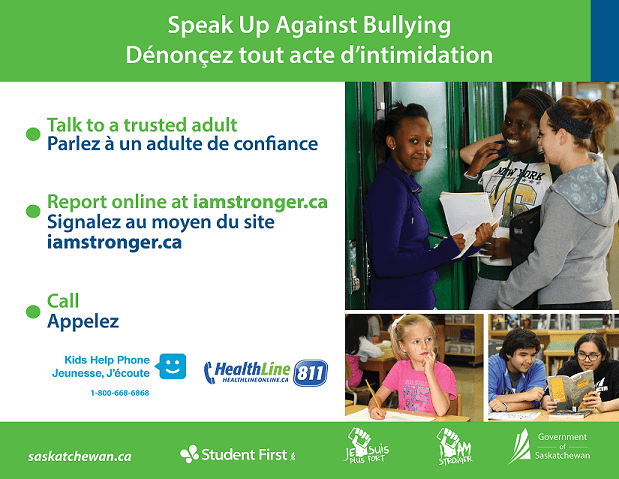 “As a government, we are going to look at broadening ways to assist students in the areas of digital citizenship and Internet awareness,” Eyre said.

The Ministry of Education and SaskTel also work in partnership to encourage youth to promote positive change in their schools and community.  Grants of up to $1,000 are awarded for youth-led initiatives that promote kindness.

Since launching the I Am Stronger grant program in 2014, 56 grants totalling nearly $50,000 have been awarded.

“Students and staff in Saskatchewan should be applauded for the remarkable ways in which they are standing up to bullying,” Eyre said.

“Raising awareness is an important step in preventing cyberbullying,” SaskTel Acting President and CEO Doug Burnett said.  “We’re proud that the I Am Stronger program is able to help empower students and teachers as they move on to the next step of taking action by becoming positive forces in their communities and schools.”

In 2013, the Government of Saskatchewan released Saskatchewan's Action Plan to Address Bullying and Cyberbullying, which acts as a roadmap that guides the government’s work to end bullying.

To find out more, visit https://www.saskatchewan.ca/residents/education-and-learning/anti-bullying.