Following Their Voices, the made-in-Saskatchewan initiative to improve educational achievement and graduation rates of First Nations, Métis and Inuit students, is expanding to 11 new schools in 2017-18 as a result of a new federal investment of $3 million over three years.

The Ministry of Education is continuing its commitment of $1.55 million, bringing total 2017-18 funding to $2.56 million.

“The success we’ve seen in student engagement, attendance, credit attainment and graduation rates at these schools since implementing Following Their Voices is outstanding,” Morgan said.  “The additional investment from INAC will allow this initiative to expand and reach many more students in Saskatchewan.  I am excited to see even more progress toward our shared goals.” 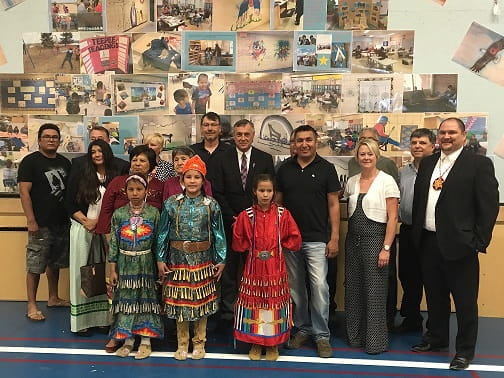 There will be 27 schools, up from 16 schools, implementing Following Their Voices in September 2017, with approximately 440 teachers directly involved.  Data from June 2016 showed significant attendance increases, a one per cent increase in credit attainment and a two per cent increase in graduation rates at Following Their Voices schools after the first year of implementation.  Overall, the number of First Nations, Métis and Inuit students graduating within three years of starting Grade 10 has increased from 32 per cent in 2009 to 42 per cent in 2016.

“Congratulations to Following Their Voices for your great success,” said Carolyn Bennett, Minister of Indigenous and Northern Affairs Canada. “Initiatives like these not only improve educational achievements and graduation rates of First Nations, Métis and Inuit students, but also provide a safe space for students to develop a secure personal, cultural identity which leads to better health, education and economic outcomes.  Improving educational outcomes for Indigenous students is a top priority for the Government of Canada and together with the Province of Saskatchewan, we are proud to invest in education that accelerates learning; where learning is joyful, culture is affirmed and students are given real choice for their future.”

"Following Their Voices has not only seen improvements in data related to Métis and First Nations student success, but we've also see a change in practice, which is exciting,” Treaty Six Education Council Director of Education and Following Their Voices priority owner Pat Bugler said.  “Working with the provincial government, school divisions, First Nations education leaders, and now the federal government on this initiative, shows how important student success is in Saskatchewan and across Canada.”

Since 2015-16, the Government of Saskatchewan has invested $4.65 million for Following Their Voices.  This reflects the government’s continued commitment to ensuring equitable education outcomes for all Saskatchewan students by responding to the recommendations from the Joint Task Force on Improving First Nations and Métis Education and Employment Outcomes in Saskatchewan.