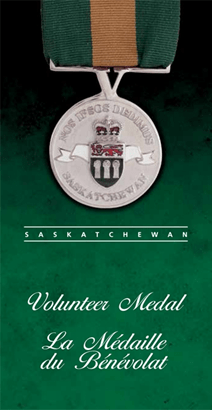 “These recipients of the Saskatchewan Volunteer Medal exemplify the very best of Canadian qualities, including generosity, compassion and service,” Solomon Schofield said.  “I congratulate each of them on this well-deserved honour, and I thank them for their enormous contributions to the people and communities of Saskatchewan.”

The 2016 Saskatchewan Volunteer Medal recipients to be honoured during the 150th anniversary of the Confederation of Canada are:

Saskatchewan has a long and proud history of volunteerism with more than 8,000 community-based organizations active in the province today.  The spirit of helping one’s neighbour, which helped build this province, continues to shine in this special anniversary year.  In four Statistics Canada surveys between 2004 and 2013, Saskatchewan led the country in volunteerism.

The Saskatchewan Volunteer Medal was established in 1995 to recognize volunteers and those who demonstrate exceptional community involvement.  This recognition cannot happen without the effort of those who submit nominations.

The recipients will receive their medals during a ceremony with Solomon Schofield in Regina on Monday, April 24, 2017.

For more information about the Saskatchewan Honours and Awards Program and to nominate an outstanding Saskatchewan citizen, visit www.saskatchewan.ca/honoursawards.