Phase One of Highway 7 Twinning Opens to Traffic

The First Phase Of Twinning On Highway 7 Is Now Complete

“The Government of Canada recognizes that smart investments in transportation infrastructure support local, national and international trade, and create good, well-paying jobs that help the middle class grow and prosper,” said Ralph Goodale, Minister of Public Safety and Emergency Preparedness, on behalf of Amarjeet Sohi, Minister of Infrastructure and Communities.  “We are proud to invest in improvements to one of Saskatchewan’s major interprovincial trade corridors, which will ensure the safety of travelers and contribute to the economic growth in this region.”

Highway 7 is a key trade route for the province and connects communities such as Kindersley, Rosetown, Delisle and Saskatoon, as well as Calgary and the ports on the west coast.  Over the last 10 years, traffic volumes have increased by about 50 per cent, from 5,000 vehicles per day to about 9,100 per day. 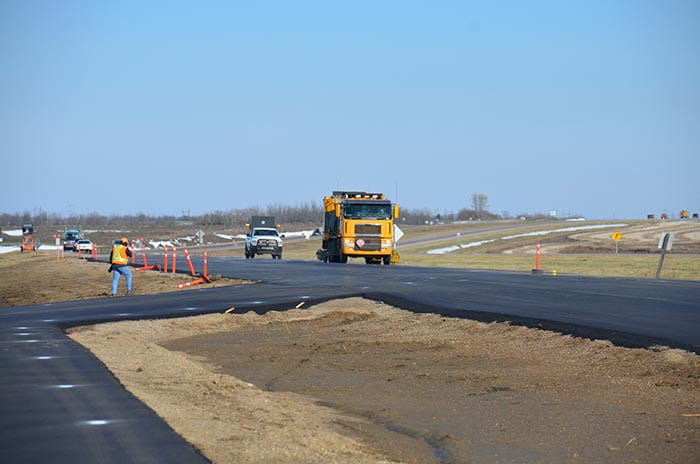 “Highway 7 is a busy corridor for commuters and shippers,” Government House Leader and Saskatoon Silverspring-Sutherland MLA Paul Merriman said on behalf of Highways and Infrastructure Minister David Marit.  “This twinning project and the new passing lanes completed on Highway 7 between Delisle and Rosetown last year will help enhance safety and improve the flow of traffic.”

Pre-construction work continues on the next phases of the project.  This includes design, environmental assessment and land acquisition.  As the new lanes are opened, please be cautious, alert and aware of signs directing traffic.  Construction on the eastbound lanes will be required in order to improve some of the intersections, which will require eastbound traffic to be temporarily reduced to single-lane traffic.  Please slow to 60 km/h in the work zone.

The Government of Saskatchewan has invested $6.3 billion in transportation infrastructure since 2008, improving more than 11,000 kilometres of provincial roads.