Saskatchewan producers have three per cent of the 2016 crop in the bin, according to Saskatchewan Agriculture’s Weekly Crop Report. Seven per cent of the provincial crop is swathed or ready to straight-cut.  Harvest progress is on par with the five-year average (2011-2015).  The break in rain showers toward the end of the week allowed producers in many parts of the province to continue with harvest.

Yields are estimated to be above the five- and 10-year averages across all crops, with the exception of lentils and chickpeas. 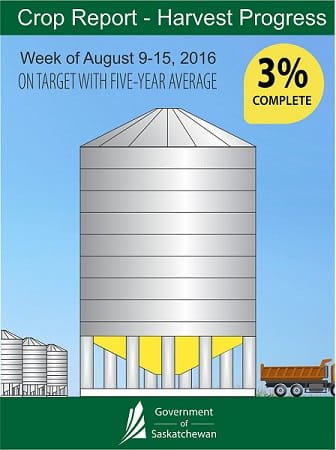 Producers may have difficulty accessing fields due to all the rain, and other fields may be too soft to support harvest equipment.  The majority of last week’s crop damage was caused by excess rain and lodging.

Producers are busy with harvest and haying.