Premier's Award for Excellence in the Public Service

Established in 2003, this award is presented to members of Saskatchewan's public service (individuals, groups or teams) who have made outstanding on-the-job contributions to the government and citizens of the province.  The Premier's Award is a way to recognize, celebrate and take pride in the achievements of our province and people.
Renseignements en français 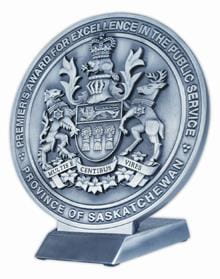 Individual recipients and team leaders receive a pewter trophy. All recipients receive a lapel pin bearing the Saskatchewan Coat of Arms with the provincial motto Multis e gentibus vires (From many peoples strength) and a certificate to recognize their achievement. The Premier or his designate presents the award.

What are the nomination criteria?
The Premier's Award for Excellence in the Public Service recognizes employees who have made outstanding on-the-job contributions to the government and citizens of the province, while exemplifying our core values in action. Nominations are to align with the Government of Saskatchewan's Commitment to Excellence and demonstrate the following core values:

Volunteer activities and long-time service are not considered for this award. Posthumous nominations are not eligible.

Who is eligible?
Employees of ministries, Crown Investments Corporation Crowns, Treasury Board Crowns, agencies, boards and commissions are eligible.

Nominations may be submitted for:

Who can nominate?
Any individual or group may submit a nomination for the Premier's Award for Excellence in the Public Service.

How many awards will be given out?
An independent selection committee recommends three to six individual or team recipients per year.

Completing the nomination form
Please provide the selection committee with the most useful information about your nominee. Carefully consider the criteria for the award (alignment with the Government of Saskatchewan's Commitment to Excellence and core values in action) and relate them to your nominee's achievements.

All information provided is confidential and exclusively for the use of the selection committee.

Support documents
One support letter is required to demonstrate the nominee's impact. To further enhance your nomination, up to three letters may be included.

Other supporting material, such as newspaper articles or videos, may be provided in digital format.

Submitting a nomination
Mail, or scan and email, the nomination form by June 30, 2022, to: