Kochia and Russian thistle are well adapted to hot dry conditions. Soft, thick hairs cover most leaf surfaces of kochia, protecting it from excessive drying while Russian thistle preserves moisture by producing tubular leaves as a seedling to reduce surface area for evaporation, similar to a cactus. These adaptive features are necessary until the plants develop deep, and widely branched, taproots to access soil moisture. Both plants are well adapted to germination under low moisture conditions that would limit the germination of many plants. Neither does well under moist environments due to the competition from other moisture loving plants.

An additional trait of kochia and Russian thistle that adapt them to hot dry conditions is their C4 metabolism. Plant species are separated into C3 and C4 plants, based on their photosynthetic processes. C4 plants have an additional metabolic adaptation that allows them to use CO2 more efficiently than C3 plants, under low CO2 conditions. C4 plants also have the ability to store CO2 in their leaves during the evening for use during the day. During hot days with high potential for moisture loss, C4 plants can close their leaf pores (stomata) to protect against moisture loss without sacrificing much growth potential during daylight hours. Meanwhile, C3 plants are caught between a need for more CO2 and a need to preserve moisture, so their potential for growth is severely inhibited during hot days. Other C4 plants include green and yellow foxtail (wild millet), barnyard grass, pigweed, cocklebur, corn and millet. However, the additional metabolic adaptation comes with a cost, as it is actually a burden to C4 plants under cool, moist conditions, where C3 plants are more efficient. 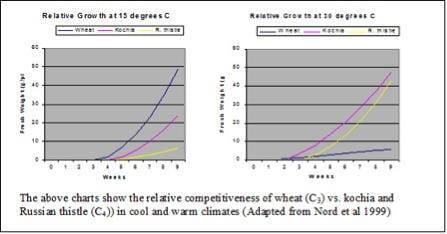 Under competitive crop conditions, kochia and Russian thistle are not much of a match for most crops. Most of the crops grown on the northern Great Plains are C3 plants. Because this region generally experiences more cool weather than hot, the weakness of the C4 metabolism under cool temperatures can be used against the tumbleweeds by striving for maximum ground cover as early as possible in the season. Several cultural methods can be used to give the crop the best advantage over these weeds. All of these methods are designed to take advantage of the less competitive nature of kochia and Russian thistle under cool, shaded conditions.

Kochia and Russian thistle take advantage of the opportunity when crop canopies are uncompetitive, such as seeding on wide row spacing, blocked runs, or when the crop is generally unthrifty due to poor nutrition or hot dry weather. Seeding in narrow rows will allow the crop canopy to fill in more quickly and out-compete kochia and Russian thistle. Rows greater than eight inches will leave ample soil exposed to the warming sunshine to the advantage of warm season weeds. The wider spacing on direct-seeding equipment may be contributing to a recent increase in kochia problems in the black soils.

Very uncompetitive crops such as flax, lentils, chickpeas and beans allow high levels of sunlight to reach the ground and warm the soil surface. Under these conditions warm season weeds such as kochia and Russian thistle will be able to get established and compete successfully with the crop. A good option for these crops is to follow very competitive crops in the rotation that will not allow the replenishment of the seed bank.

This short seed viability has implications for management. Preventing the production of seed for one year will significantly reduce populations, and two years will nearly eradicate populations. Fallow or short-term perennial forage production, are two ways to prevent kochia seed production. Kochia and Russian thistle have both been evaluated as forages and can be fed safely as a portion of the overall diet of livestock. Risks from excessive proportions in livestock feed can be oxalate content in kochia and nitrates in Russian thistle so both should be fed with other forages.

While the short seed life means that infestations should be relatively easy to eradicate, it also means that the weed populations in a field can adapt quickly to management pressures and evade control. The other difficulty with attempting eradication through intensive management is the reintroduction of seed to fields from outside sources sustaining the supply of seed in the soil. Because of this management strategies for preventing reintroduction should also be taken.

Russian thistle and kochia are both able to germinate and emerge very quickly (one to three days) when conditions are appropriate. This quick emerging trait also means that they will beat every crop in a race out of the ground. To minimize the advantage to the weeds, seed as shallow as possible and use starter fertilizer to increase the speed and vigour of the crop as it emerges from the soil. The tumbleweeds germinate more readily when close to the soil surface. As a result, germination in low disturbance direct seeding systems occurs more rapidly than under conventional tillage systems where emergence continues over a relatively longer period in the spring. This makes the use of preseeding/pre-emergent herbicide burn-off treatments as close to crop emergence as possible an important management strategy.

While both plants tolerate salinity, kochia is particularly saline tolerant and will grow in areas with salt concentrations that exclude all other growth. Pay particular attention to the populations growing on saline areas and simply mow them down to prevent these plants from contributing to the seed in your field. Reclamation of these saline areas with salt tolerant forage species is a long-term solution to islands of kochia acting as ongoing sources of seed return to the field.

Both kochia and Russian thistle are tumbleweeds, spreading their seeds far and wide after high winds snap the brittle stem bases and propel them across the landscape. Short seed viability of these weeds, maximum two years for both, should mean that diligent managers should be able to rid themselves of these weeds in short order, but the tumbling habit means that winter interlopers deposit seeds on land that is otherwise free of the weeds.

In order to prevent the tumbling problem with these weeds, it is important that any plants remaining at the end of the growing season be completely shredded with a mower to restrict their spread. The worst management practice for standing tumbleweeds is to till them at season's-end since it dislodges them more completely than if they were left standing.

Shelterbelts may be another way to manage tumbleweed spread by acting as a both a wind block and a net to catch the tumbleweeds. While the shelterbelt itself may be thick with the weeds, they will be less dense through the field. The tumbleweeds and other weeds can be managed in the shelterbelt with various methods ranging from tillage to soil active herbicides.

There is a wide selection of herbicides available to control the tumbleweeds, but there are still complaints about performance and the ability to control the tumbleweeds easily. The defensive foliar traits produced by kochia (hairs) and Russian thistle (narrow, round leaves) also make it hard for herbicides to do their job. It is important to keep water volumes in the upper recommended ranges to maintain sufficient coverage to penetrate these defences. For the most up to date selection of herbicides for kochia and Russian thistle control, see the Guide to Crop Protection.

The other difficulty with Russian thistle and particularly kochia is that they are prone to the development of resistance to herbicides. Kochia produces about 15,000 seeds per plant and Russian thistle can produce up to 100,000 per plant. Kochia was the first weed to demonstrate resistance to the Group 2 herbicide, Glean, shortly after it had been released in the mid 1980's and can be considered largely tolerant of Group 2 herbicides now after a short 20 year time span.

Kochia has since demonstrated Group 5 resistance, mainly to atrazine in corn in the USA, while both Montana and North Dakota have reported populations resistant to Group 4. Group 2 resistant Russian thistle was found in Saskatchewan shortly after resistant kochia, but is less abundant than resistant kochia.

Glyphosate resistant kochia has been found in the brown and dark-brown soils zones of Saskatchewan and Alberta as well as the Red River Valley of Manitoba. Kochia resistant to Group H herbicides has been found in southwest Saskatchewan that is also resistant to Group 2.It is felt that the resistance in the brown and dark brown soil zones is as a result of the practise of chemical fallow using several applications of glyphosate per season. Eliminating chemical fallow practices from rotations or mixing glyphosate with herbicides from Groups other than Group 2 will help slow the progression of resistance seen with Group 2 resistance.

The combination of a tendency for resistance development and a tumbling habit has and will continue to result in rapid spread of resistance populations if they are not monitored and physically eradicated when patches are small. Weed populations that are not controlled by a herbicide while other labelled weeds are killed, are likely resistant and alternative management methods are required if spread is to be prevented. Monitor herbicide applications about four weeks after application to evaluate performance and manage resistance.

Control of kochia and Russian thistle should be relatively straight forward in theory, but management seems to be getting more difficult. Their response to weather is apparent and while we can't control the weather, we can take actions to lessen its impact when it works against us.

A change in several agronomic practices including wide row spacing, lower water volumes used for herbicide application and the onset of resistance may be contributing to the reports of increasing tumbleweed populations. Adjusting cultural practices to attack the weaknesses of tumbleweeds with the goal of preventing seed production in mind, particularly during a cool, moist climatic cycle, will reduce seed numbers in the soil as well as field populations.

Kochia was brought to North America as an ornamental shrub and Russian thistle was a contaminant in flax seed. They are related to each other and to other common weeds such as atriplex, Russian pigweed, povertyweed, lamb's-quarters and other goosefoot species as well as domestic plants like beets and spinach. Owing to their origin, kochia and Russian thistle share several other things in common.