Blackleg is a serious disease of canola that can result in significant yield loss in susceptible varieties. It is caused by the fungus Leptosphaeria maculans. A highly virulent strain of the blackleg fungus was first detected in Saskatchewan in 1975 and has since become widespread throughout the canola-growing areas of the province.

Canola disease field surveys are conducted annually in the main canola production regions of Saskatchewan. Disease surveys from recent years indicate that blackleg is commonly found in 35 to 74 per cent of crops surveyed. Lesions occurring elsewhere on the stem will have less impact on seed yield and quality than will basal stem cankers.

For additional information on the canola disease survey and other crop disease surveys, please visit the Canadian Phytopathological Society.

Small microscopic spores, called ascospores, are released from the pseudothecia and become airborne, resulting in long distance dispersal of the disease to newly planted canola crops. Ascospore release can begin as early as May, causing leaf lesions from the seedling stage onward. The earlier the infection occurs, the greater the likelihood of basal stem canker development and more severe yield loss. Pseudothecia may continue to be produced on infected residue for two more years, or until the infected residue breaks down. 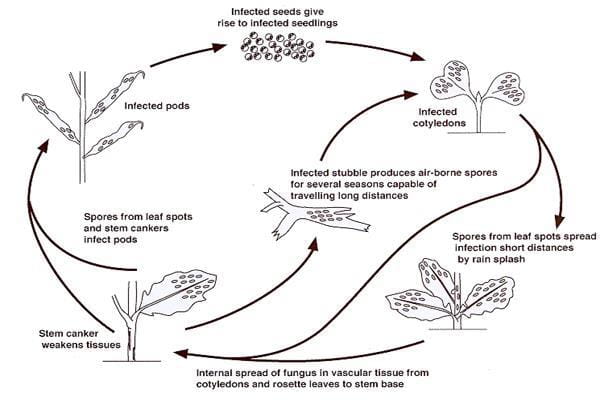 During the growing season, the blackleg fungus produces another type of fruiting body called a pycndium (plural: pycnidia), which exudes conidia. These spores are spread short distances by rain splash and cause secondary infection within a crop. These secondary lesions are of less consequence to the crop and are commonly observed in fields that received injury from hail damage (Figure 3).

Infection before the six-leaf stage is usually associated with serious yield loss. Stem lesions girdle the stem base, preventing the flow of water up the stem and often result in lodging of the crop. Infections initiated beyond the six-leaf stage cause less damage. Pod infection can result in infected seed, which serves as another source of inoculum for future infestation.

It is necessary to accurately identify the disease before implementing a costly fungicide application. There are other pathogenic and abiotic diseases that can be confused with blackleg. If you're uncertain, have the disease confirmed by submitting a sample to the Crop Protection Laboratory.

Crop rotation allows for the decomposition of infected canola residue. Canola should not be seeded in canola stubble or adjacent to canola stubble that has had infected plants during the previous three years.

Wild mustard and volunteer canola can maintain the disease from year to year. Good weed control in the non-canola years will help break the disease cycle.

Plant seed that has been tested at an accredited laboratory and determined to be free of virulent strains of blackleg and/or use a seed treatment. Seed treatments are also beneficial for other seed- and soil-borne diseases, as well as for flea beetle control. For more information on registered canola seed treatments, refer to the Guide to Crop Protection.

A foliar fungicide may be warranted if blackleg symptoms are easily observed at the seedling and rosette stages or if a susceptible variety is being grown. Refer to product labels for information on timing and application of foliar fungicides.

Burial of infected canola residue has long been recommended as a practice to speed up the decomposition of canola residue and reduce disease inoculum. However, recent research has found that zero tillage does not increase the risk of blackleg as long as a crop rotation with cereals and pulses is maintained. The use of straw choppers during combining effectively reduces straw size and spreads the straw over the soil surface, which will aid decomposition.

A high level of resistance to blackleg is available in varieties of Argentine canola (Brassica napus), brown and oriental mustard (B. juncea) and yellow mustard (Sinapis alba). Almost all varieties of Polish canola (B. rapa) are susceptible or moderately susceptible to blackleg. For more information on specific canola variety disease ratings, see Varieties of Grain Crops.

Although all varieties of canola are resistant, or marginally resistant, to blackleg, new blackleg strains have been identified by researchers that potentially have evolved to break down this resistance over time. Therefore, if you find a significant number of infected plants in your field, it is important to notify the Agriculture Knowledge Centre.