The Government of Saskatchewan has proclaimed September 18 to 24 as National Forest Week, with the theme, Canada's Forests: Solutions for a Changing Climate. The week will highlight the important role that provincial forests play in Saskatchewan's environment and economy.

More than half of Saskatchewan is covered in forests, with 97 per cent of those on provincial Crown land. This renewable resource supports a thriving forest sector, which is an important economic driver in Saskatchewan.

"Forestry has, and continues to be, a crucial sector for our province," Energy and Resources Minister Jim Reiter said. "Several new investments announced over the past year will add value to the economy and create thousands of jobs across the province. As a significant employer in the north and contributor to keeping our economy strong, we will continue to promote Saskatchewan as the best place in Canada to sustainably develop our natural resources including our forest sector." 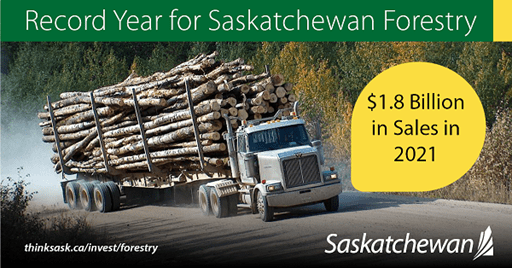 Saskatchewan's forestry sector is also attracting significant investment and poised to harvest and produce record levels of timber and forest products as early as 2024.

In 2021 approximately $900 million of new planned investments were announced, including $400 million to reopen the Prince Albert pulp mill, $250 million for a new oriented strand board (OSB) mill in Prince Albert, and a $100 million expansion of the sawmill in Carrot River.

These investments are part of the province's ambitious Growth Plan to boost sales to $2.2 billion and exports to $1.2 billion annually by 2030, as well as increase forest sector employment by 50 per cent to nearly 12,000 direct and indirect jobs. Forestry is currently the largest sector in Saskatchewan's north and relies heavily on Indigenous workers and businesses.

Indigenous people make up 27 per cent of the total forestry workforce in Saskatchewan, with many Indigenous-owned forestry businesses from sawmills and timber harvesting operations to road construction, trucking, and reforestation companies. NorSask Forest Products' sawmill is located in Saskatchewan and is the largest sawmill in Canada that is wholly-owned by First Nations.

Historically, timber harvests in Saskatchewan have remained well below what the forest can sustainably support. Provincial industry harvest approximately 16,000 hectares of Saskatchewan forest, or less than half of one per cent of all productive forest land, each year.

"Saskatchewan's harvesting and reforesting practices are some of the most sustainable in the world as all operators are required to make sure all sites are reforested in a timely manner," Environment Minister Dana Skoropad said.  "Ensuring sustainability and regrowth of our forests remain at the forefront of our efforts as forestry continues to be the economic backbone of the north."

Currently only 46 per cent of the annual allowable cut (AAC) is being harvested, but that's expected to increase to 76 per cent by 2026, to support the projected growth of the forestry sector.