"Highway 3 is an important and busy transportation corridor for commuters and transport trucks and functions as an important highway to move people and goods safely and efficiently," Bradshaw said. "Saskatchewan motorists have seen the efficiency and increased safety passing lanes offer and we will continue to look at further investments where they can provide the most benefit around the province."

This passing lane project is one of many highway construction projects in the Prince Albert area. This past July saw the opening of five sets of passing lanes on Highway 2 North and later this fall, pre-construction is scheduled to begin on about eight kilometres of twinning west of Prince Albert. 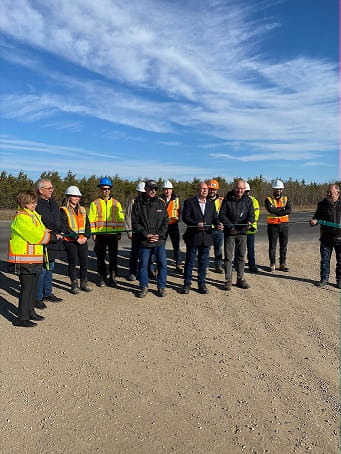 "We are very pleased to see these highway safety improvements for the area as we will see traffic moving better and fewer lives lost," Shellbrook Reeve Doug Oleksyn said.

"As a bedroom community of Prince Albert, these are important safety improvements for the many commuters who drive this highway daily," Shellbrook Mayor Amund Otterson said. "It will help reduce stress and provide a better quality of life as a result."

Passing lanes are typically a minimum two kilometres in length and are designed to allow vehicles to pass slower moving vehicles safely, such as large trucks and semi-trailers.

The Government of Saskatchewan is keeping its 10-year Growth Plan commitment to build and improve 10,000 km of provincial roads and highways, with more than 1,350 km improved this year. At the end of this construction season, the province is ahead of the pace and on budget to meet this target.