Today, job numbers released by Statistics Canada for September 2021 show Saskatchewan's unemployment rate fell to 6.3 per cent from 7.1 per cent a year ago, and well below the national average of 6.9 per cent (seasonally adjusted).

Saskatchewan gained 11,500 jobs in September 2021 compared to the same period last year.  This represents an increase of 2.0 per cent.  Month-to-month seasonally adjusted employment increased by 5,300 (+0.9 per cent) from August 2021, above the national increase of 0.8 per cent.

"Saskatchewan's economy continues to show resilience as it has throughout the pandemic, with more job gains and a low unemployment rate," Immigration and Career Training Minister Jeremy Harrison said.  "As our economy continues to recover and grow, we'll see even more good jobs and opportunities for Saskatchewan people in the months ahead." 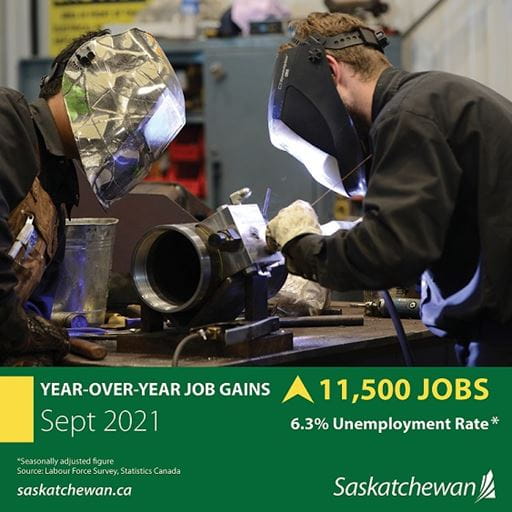 Saskatchewan's youth unemployment rate was 9.1 per cent, the second lowest among the provinces and well below the national average of 11.3 per cent (seasonally adjusted).