An exciting fossil find in southwest Saskatchewan - a Prognathodon - is creating quite a stir in the lab at the Royal Saskatchewan Museum (RSM).

Often called the 'T.rex of the sea' because of their massive skulls and teeth adapted for a mixture of cutting and crushing - Prognathodons are mosasaurs, related to the RSM's famous Tylosaurus specimen.

"This is a very significant find and we are very excited about the prospects of this specimen," Parks, Culture and Sport Minister Laura Ross said. "This is another example of the excellent work being done by the RSM's research staff - and that there is always something new happening at the RSM." 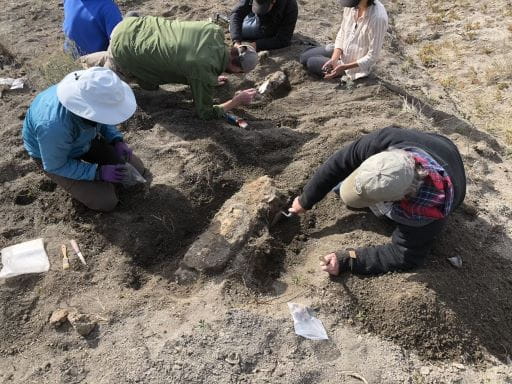 Like many fossil discoveries, this specimen is taking a number of years to unearth. Originally found by an area resident, Parks Canada was contacted to investigate the discovery in Grasslands National Park in 2012.

Parks Canada and RSM staff visited the site in November 2012 and collected small fragments of the skull. Additional surface material was collected in 2013.

RSM staff secured a permit in 2019 to dig at the site and recovered some material just under the surface. Parks Canada staff, RSM palaeontologists and graduate students went back in September 2021 to expand the dig and trace the surface material.

"Some of the world's most exciting fossil finds have been unearthed in Western Canada and this giant Prognathodon, found in Grasslands National Park, adds to our knowledge of the ancient sea life that once covered Saskatchewan," said Steven Guilbeault, Minister of Environment and Climate Change and Minister responsible for Parks Canada. "Parks Canada is proud to work with the Royal Saskatchewan Museum to expand our scientific knowledge, fire our imagination, and share these discoveries with the public for years to come." Prognathodon lived in the Western Interior Seaway, which was a shallow continental sea that extended from the Gulf of Mexico to the Arctic Ocean throughout much of the Cretaceous period, about 75 million years ago.

"We were pleasantly surprised to find most of the front of the skull was preserved, and additional bones are running into the hillside," RSM Palaeontologist Dr. Ryan McKellar said. "This new find is going to add another incredible piece to the Saskatchewan's provincial collection held at the RSM and we want to thank Parks Canada for their assistance in this amazing discovery."

In Saskatchewan, Bearpaw Shale was deposited by this seaway across much of southern Saskatchewan. Grasslands National Park West Block is one of the best places to find fossils in this rock layer because of the park's extensive badlands exposures. It is hoped that more of the body can be recovered in the coming summer and could add another marine reptile more than 10 metres in total body length to the provincial collection.

The specimen will be housed at the RSM and is expected to be part of new fossil exhibits planned for the museum in three or four years.

Note: Visitors 12 and older must be fully vaccinated or have a negative Covid-19 test to visit the Royal Saskatchewan Museum. Visit the Government of Saskatchewan website for further information about how to obtain proof of vaccination and the latest COVID-19 information.