The 2020 edition of the Mining Journal Intelligence World Risk Report ranks Saskatchewan among the very top jurisdictions globally for doing business in the mining sector.

“This report confirms that Saskatchewan, through stable policies and regulation, has created among the strongest mining investment climates in the world,” Energy and Resources Minister Bronwyn Eyre said.  “The mining sector plays a critical role in our economic recovery, and we will continue to ensure that Saskatchewan is among the top international jurisdictions for investment in the exploration and development of minerals.” 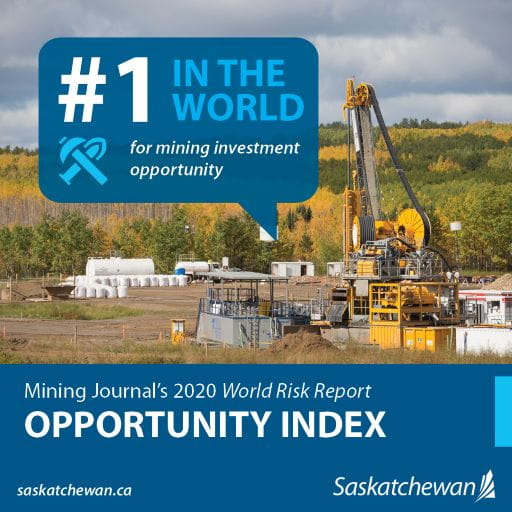 Saskatchewan achieved the highest rating in the report’s Opportunity Index, a combination of perceived mineral potential and investment risk.  With respect to overall investment, Saskatchewan was one of only two jurisdictions that achieved the highest AAA rating.  The report looked at five major areas, including legal, governance, social, fiscal, and infrastructure performance metrics.

The report, which is published in London, UK by an Australian-owned company, relied on survey responses from more than 900 mining sector professionals, combined with ten metrics from established, risk-related indices in determining the rankings.  The report ranks 111 jurisdictions across 83 countries.

Saskatchewan’s 10-year Growth Plan, released in November 2019, aims to attract further investment in the province’s world-class mining sector.  Its targets include increasing the annual value of uranium sales to $2 billion, potash sales to $9 billion, and encouraging the exploration and development of strategic metals and minerals in Saskatchewan.