According to Saskatchewan Agriculture’s Weekly Crop Report 47 per cent of the crop is now combined, up from 39 per cent last week.  An early-winter storm slowed down most harvest operations in the province; however, producers were able to make some progress before the storm hit.  The five-year (2014-18) average is 75 per cent combined for this time of year.

Thirty-four per cent of the crop is swathed or ready to straight-cut.  Much of the crop harvested so far is tough and is being put into grain dryers and aeration bins.  Farmers will need several weeks of warm and dry weather to get the crop off. 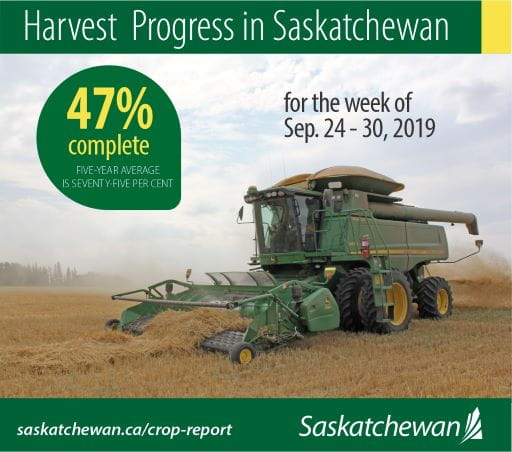 Most areas of the province received significant precipitation last week.  The Admiral area reported 103 mm, while the Moose Jaw area received up to 60 mm.  Although the moisture further delays harvest, it helps topsoil moisture conditions. 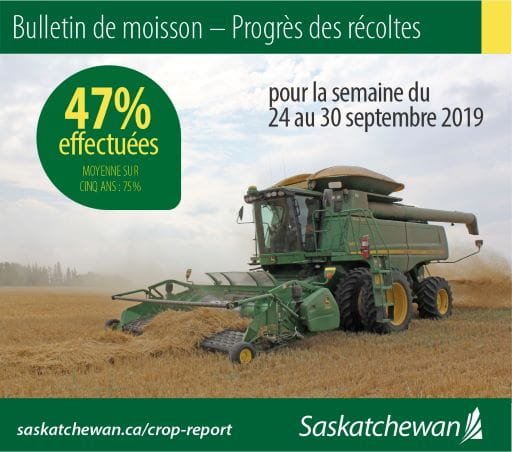 The majority of crop damage this past week was due to hail, strong winds, lodging, localized flooding and frost.  There continues to be many reports of crops sprouting, bleaching and staining and downgrading is expected.  Geese and wildlife are also feeding on swathed crops and causing damage.

Farmers are busy drying grain and waiting for the weather to improve so they can continue with harvest operations.