“I am pleased to celebrate this new Catholic school in Rosewood – an important achievement for the Rosewood community and our province,” Eyre said.  “The addition of St. Thérèse of Lisieux Catholic School supports the rapid growth and makes this community an even more attractive place to live and raise a family.”

“As our city continues to grow and expand, having schools that act as hubs of activity in our neighbourhoods will be increasingly important parts of each community,” Greater Saskatoon Catholic Schools Board Chair Diane Boyko said.  “We all know it’s the people that make a community, not the buildings.  St. Thérèse will be a hub of faith growth and development in addition to its role as a centre of education and extra-curricular activities.”

St. Thérèse of Lisieux Catholic School can accommodate up to 650 students at full design capacity. 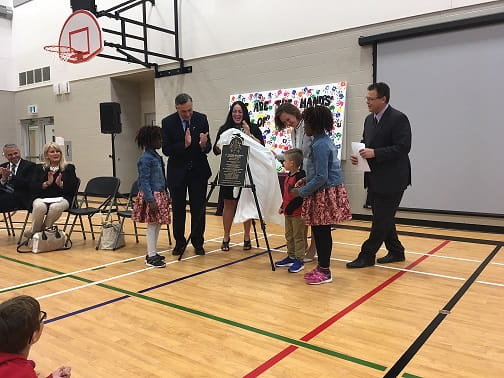 St. Thérèse of Lisieux makes up one half of a joint use school with Colette Bourgonje School.  It is part of the P3 Joint-Use Schools Project that includes 18 publically owned elementary schools built at nine joint-use sites in Saskatoon, Martensville, Warman and Regina.

Like all of the joint-use schools, St. Thérèse of Lisieux Catholic School is built in a community that has witnessed unprecedented population growth over the past decade, including many young children and families.  Once completed, the Rosewood neighbourhood will have an estimated population of 12,000 residents.

Since 2007, the Government of Saskatchewan has committed approximately $1.5 billion toward 67 major school capital projects and numerous smaller projects such as portable classrooms and preventative maintenance and renewal.