Harvest has all but wrapped up for producers in the province as 99 per cent of the crop is now combined, according to Saskatchewan Agriculture’s Weekly Crop Report.  There are still some crops such as flax, soybean and sunflower left to be combined.  Harvest weather was favourable for much of the fall, allowing producers to pull off well above-average crop quality.

Although field conditions remained dry for the majority of the province, producers had fewer rain delays than in previous years and were able to take most crops off in relatively good condition.

There were also limited reports of diseases such as fusarium head blight impacting crop production this year.  The majority of crops are being reported as falling within the top two quality grades.  Crop yields vary greatly throughout the province, depending on seeding date and the amount of moisture received throughout the season.
Overall provincial yields are on par with the 10 year average, although some areas in the north are reporting higher than normal yields thanks to timely moisture.  Yields in most southern and some central areas of the province were significantly affected by the extended period of hot and dry conditions this summer. 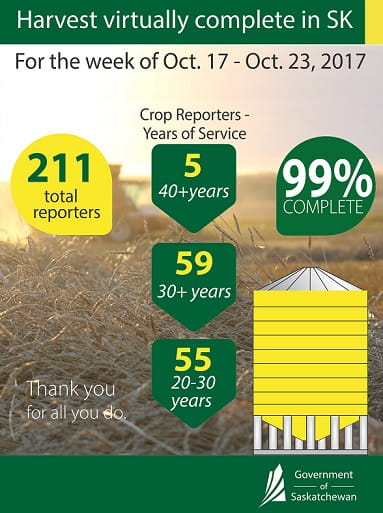 Topsoil and subsoil moisture conditions remain a concern for much of the province.  Very little moisture has been received in the last number of weeks and strong winds have further dried fields.  The fire risk remains very high in southwestern areas and there have been many reports of grass and stubble fires in recent weeks.  Significant moisture will be needed heading into winter to replenish what has been lost throughout the growing season.  The majority of producers have indicated that the subsoil is very dry and that seeding conditions next spring will be impacted if moisture is not received.

At this time, most livestock producers have indicated that they will have adequate supplies of hay, straw, greenfeed and feed grain heading into winter.  However, producers in southern regions are reporting that many areas will have inadequate winter feed supplies and that shortages will be likely.  The loss of feed supplies due to recent fires in the southwest has increased concern for producers in those areas.

With the drier than normal field conditions this fall, the number of acres seeded to winter cereals is below average in most areas.  Rain was received in much of the province at the end of September, allowing for winter cereal crops to germinate and establish.

Thanks to the recent warm and dry weather, producers have been able to complete fall work such as putting down fertilizer, fixing fences, moving cattle, working fields, hauling bales and grain, picking rocks and cleaning up fields.  Many producers, particularly in eastern regions, have been able to reclaim acres lost to flooding in previous years.