The governments of Canada and Saskatchewan are committed to investing in local infrastructure that provides Canadians and their families with access to modern, reliable water and wastewater services that meet their needs.  These investments safeguard the health and well-being of residents, protect provincial waterways and preserve local ecosystems.

Today, Ralph Goodale, Minister of Public Safety and Emergency Preparedness, on behalf of Amarjeet Sohi, Minister of Infrastructure and Communities, and Indian Head-Milestone MLA Don McMorris on behalf of Government Relations Minister Donna Harpauer, announced funding for an estimated $6.4 million expansion for the Town of Balgonie’s wastewater system to better serve the community and position it for growth.

The governments of Canada and Saskatchewan will each contribute up to $1.5 million toward the project through the New Building Canada Fund’s Provincial-Territorial Infrastructure Component – National and Regional Projects (PTIC-NRP).  The Town of Balgonie will fund the remainder.

“The investments in infrastructure we are making will benefit Canadians for years to come: creating economic growth and middle-class jobs now, while laying the foundation for durable growth in the future,” said Goodale.  “This project will protect the local environment in Balgonie and support the community’s growth for decades to come.”

“The Government of Saskatchewan is committed to investing in key infrastructure that will position communities for growth and improve our citizens’ quality of life by improving local wastewater systems, keeping our great province strong,” McMorris said. 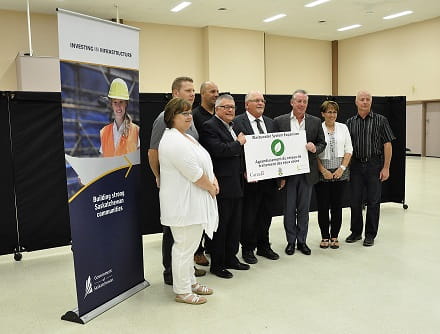 “The Town of Balgonie certainly appreciates the funding from the federal and provincial governments toward this important project, which is needed so our thriving community can continue growing, as our existing wastewater system is near capacity,” Balgonie Mayor Frank Thauberger said.

The project includes expanding the existing sewage lagoon and irrigation system, along with related works, that will improve the overall wastewater system and benefit the environment.

Once completed, the project will support economic and population growth in the community, providing services for 6,000 potential residents.  Construction is expected to begin as early as this summer.