Successful proponents will be selected through a Request for Proposal (RFP) process.  There is one opportunity available in each of the five communities.

“This is the second of four rounds of RFPs to be released as part of the transition to an expanded private retail liquor system,” Minister responsible for the Saskatchewan Liquor and Gaming Authority Don McMorris said.  “The first round of RFPs were released July 7 and pertained to the opportunities in Regina and Saskatoon.”

In November 2015, government announced changes that will see an expanded private liquor retail system in Saskatchewan.  This includes the conversion of 40 existing government liquor stores to private opportunities as well as the addition of 11 new retail opportunities.  Conversion of the Melfort liquor store will take place in 2019 when its current lease expires. 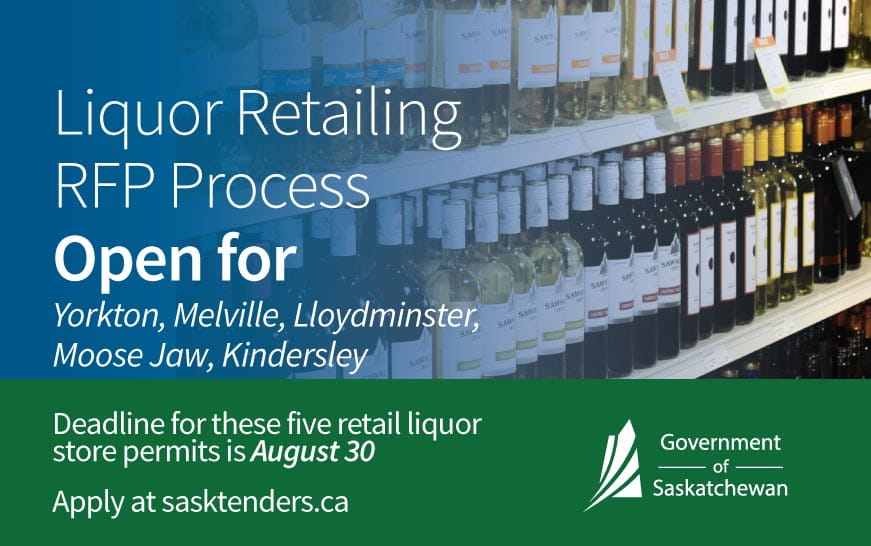 The RFP documents outline details relating to criteria, process, timelines and other relevant information pertaining to obtaining a retail store permit and can be found at www.SaskTenders.ca.

The successful proponents must also meet the standard terms required to obtain a commercial liquor permit.  Deadline to apply for the Yorkton, Melville, Lloydminster, Moose Jaw and Kindersley opportunities is August 30.

Any questions about the RFP requirements, process or guidelines should be submitted by email (only) to rfp.inquiries@slga.gov.sk.ca.

The RFPs relating to the remaining communities will be announced publicly and released in stages over the coming weeks to ensure timely and efficient processing of applications.