Parts III and IV of The Saskatchewan Employment Act outline the appeal processes for occupational health and safety matters, harassment and discriminatory action. After conducting inspections, occupational health officers will provide a decision and what corrective action is needed, if any, for matters regarding harassment and discriminatory action. Decisions made by the officers can be appealed by anyone directly impacted.

An appeal is a challenge to a decision of a government employee who administers and enforces The Saskatchewan Employment Act.

Anyone who is directly affected by a decision can formally request an appeal. This can be any of the following persons: 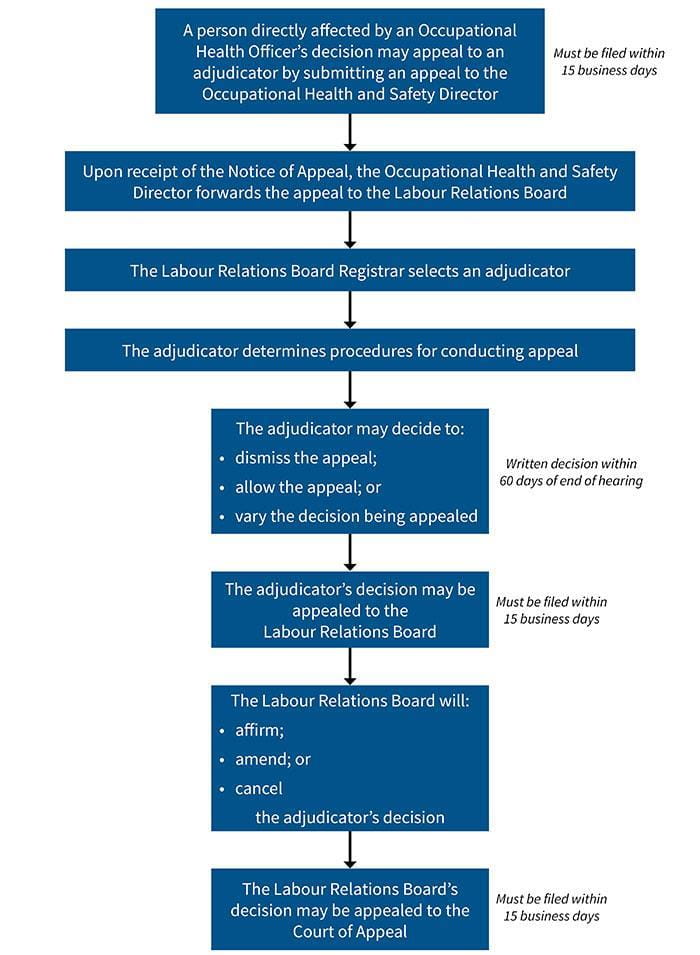 Appealing the Officer's Decision to an Adjudicator

Any appeal of an officer's decision involving harassment or discriminatory action is to be heard by an adjudicator. An appeal must be filed in writing with the director of Occupational Health and Safety within 15 business days of the date the officer's decision was received by the person.

The director will forward to the appointed adjudicator the notice of appeal, all information in the director's possession that is related to the appeal, and a list of all persons who are directly affected by the decision.

Following the hearing, the adjudicator can choose to allow the appeal, dismiss the appeal or vary the decision being appealed.

Adjudicators are independent of the Occupational Health and Safety Branch and are responsible for hearing all evidence and arguments from each party. They determine how a hearing will be conducted. They are not bound by the normal rules of evidence, meaning that they may accept any evidence they consider to be appropriate.

Appealing the Adjudicator's Decision to the Labour Relations Board

Appealing the Board's Decision to the Court of Appeal

To appeal an officer's decision to an adjudicator, a written notice of appeal must:

The notice of appeal can be mailed to:

If mailing an appeal, it is recommended employers use certified or registered mail. This will help ensure the appeal is delivered within the 15 business day limit. Appeals can also be faxed to 306-787-2208 or sent by email to ohs.executiveoffice@gov.sk.ca.

Refer to Parts III and IV of The Saskatchewan Employment Act to learn more about the legislation regulating appeals.