The province has been implementing Prairie Resilience: A Made-in-Saskatchewan Climate Change Strategy since it was launched in December 2017.

The core principle of Prairie Resilience is, of course, resilience – the ability to cope with, adapt to, and recover from stress and change. Prairie Resilience is a strategy that takes a system-wide approach and includes more than 40 commitments designed to make Saskatchewan more resilient to the effects of a changing climate. The commitments – which go beyond emissions reductions alone – span Saskatchewan's natural systems and resources, infrastructure for electricity, transportation, homes and buildings, and community preparedness.

The Climate Resilience Measurement Framework monitors resilience-related progress in five key areas: natural systems (including our land, water and forests), physical infrastructure, economic sustainability, community preparedness, and the well-being of people to adapt and prosper in a changing environment. The Ministry of Environment reports annually on the Framework's 25 scientifically-based indicators to enhance our understanding of how the province is responding to effects of a changing climate.

Government also made into law several pieces of legislation and regulations to support the climate change strategy, including electricity and emitter regulations, reporting requirements, and regulation of flared and vented methane emissions in the upstream oil and gas sector.

Since its launch in 2017, government continues to make significant progress on the strategy's commitments. Highlights include:

Saskatchewan’s Growth Plan for 2020-2030 aims "to build a better quality of life for Saskatchewan people – to build strong communities and strong families – and grow a stronger Saskatchewan now, and for the next decade."

Among its many objectives, the Growth Plan expresses specific goals related to a low-carbon economy, such as: delivering on Saskatchewan's climate change plan to reduce carbon emissions, reducing carbon emissions in electricity production, and advancing the development of zero-emission small modular reactor technology using Saskatchewan uranium. 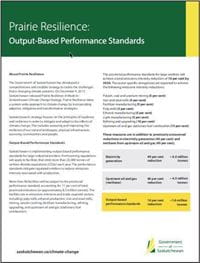