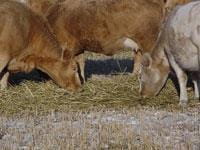 Golden German millet is a warm season (C4) crop that requires more heat units for production than wheat or barley which are (C3) annuals. Golden German millet is relatively later maturing, and therefore potentially higher yielding compared to earlier maturing millet species. Depending upon seeding date and growing conditions, Golden German millet will head out about 85-95 days after seeding, whereas Crown millet forms heads about 55-65 days after seeding. Golden German millet has medium stem thickness and numerous broad leaves up the stem. The heads are dense and bristly resembling the heads of the weed Green Foxtail, but much larger. The crop has good resistance to lodging and diseases. The seed is golden yellow in color. It is shallow rooted, but tolerates short periods of drought during the growing season.

Golden German millet, a variety of German foxtail millet, was first released by Colorado State University in 1969. Siberian and Hungarian are two other types of foxtail millet. Foxtail millet (Setaria italica L.) is an ancient crop dating back to 5000 B.C. and is grown as a grain and forage crop in China, Russia, Europe and the central United States. Foxtail millet is a close relative of the common weed Wild Millet or Green Foxtail (Setaria viridis). Millets have been evaluated for use as hay and silage as early as 1902 in Saskatchewan, but were never widely adopted. In 1994, researchers in Colorado began promoting Golden German millet as a drought-tolerant crop that would produce well on wheat stubble. In 1998, Colorado producers began using the crop for swath grazing and the practice was investigated at the Brandon Research Centre in Manitoba.

The seed should be placed one-half to three-quarters of an inch deep. Development of the crop is slow during the first four to five weeks, so it is important to have a weed-free seedbed. Seeding of the crop should be as early as possible, but delayed until the soil temperature at seeding depth taken in early morning is 10 C. A soil surface with lesser amounts of residue will warm more quickly in spring. Ideally, Golden German millet should be seeded in early June. The longer seeding is delayed, the more likely forage yield will be reduced.

With rates of nitrogen higher than 70 pounds of actual N per acre, the risk of nitrates in Golden German millet increases. Feed testing is recommended to check the feed value and nitrate levels of the final feed product. Golden German millet can accumulate nitrates, but is less subject to nitrate accumulation than oats.

Prior to seeding, the first flush of weeds must be controlled with tillage or glyphosate herbicide. Seeding can normally be delayed until early June without significantly reducing yield. Eliminating grassy weeds before planting Golden German millet is very important, as herbicides for in-crop control of grassy weeds are not available.

Warm season crops grow relatively slowly during the first four to five weeks after seeding. During this time, the plants are completing all of their cell divisions. This is a biologically taxing process, and therefore the reason for the slow growth. Once the cell divisions are complete, C4 crops can grow quite rapidly as the plant cells are simply elongating. The optimum daytime temperature for growth is 32 to 35 C. When growing conditions are good, C4 plants are more water efficient and drought tolerant than C3 plants. C4s have a waxy leaf surface that reduces water evaporation from the leaf surface. 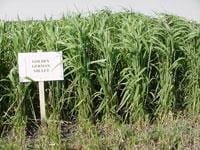 Golden German millet has been successfully utilized for round bale and chopped silage.  A dry down period is required to bring the moisture down to 50 per cent for round bale silage and 65 per cent for chopped silage. The crop is about 75 per cent moisture in the vegetative pre-heading stage. Golden German millet is not ideal for baling as it is very slow to dry in the windrow due to the waxy leaf surface. Conditioning of the crop and narrow cutting width are recommended. Cut the crop when the weather is more conducive to drying.

An alternative method for harvesting Golden German millet as dry feed is to produce "yellow feed" by applying a pre-harvest application of glyphosate. The crop is sprayed with one litre per acre of glyphosate. The glyphosate does not terminate the growth of the crop until three to five days after the application. The crop then dries standing. This process depends on the weather, and can take from 12 to 21 days or longer. Once the crop is dry, it can be swathed and baled immediately.

Grazing of standing Golden German millet during the growing season is not recommended as it does not root firmly during early growth and is easily pulled from the soil by grazing livestock. Re-growth following grazing is slow. A trial compared the forage yield of a single harvest taken two weeks after heading with multiple cut simulated grazing during the growing season. The yield from the single harvest was approximately double the total of the multiple cuts.

Golden German millet is best suited for swath grazing, but can also be used for green feed, yellow feed and silage production. Similar to corn and other warm season crops, it can produce relatively high forage yields in locations that receive significant amounts of moisture during the hottest days of the summer. It is essential that producers understand the agronomic differences between cool and warm season crops, and apply the practices that enable warm season crops to produce to their potential.