Triticale: Production and Use 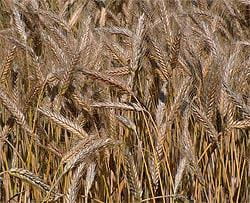 Triticale is a small-grain cereal developed to combine the quality and uniformity attributes of wheat with the vigour and hardiness of rye. The University of Manitoba initiated the first triticale breeding program in North America in 1954, with visions of developing a high- yielding, drought-tolerant grain crop suitable for the marginal lands of the Canadian prairies. The first commercial triticale was registered in 1968.

The primary advantages of triticale are: it has the ability to perform well on marginal lands; is drought tolerant; has a yield advantage over wheat when harvested for grain or silage; and, it has superior digestible energy and crude protein levels compared to barley. Triticale grain yields are about 15 to 20 per cent greater than those of Canadian Prairie Spring (CPS) wheat.

Triticale is a multi-purpose crop that can be grazed during vegetative stages of development and subsequently harvested for grain. It can also be cut for silage. When harvested for grain, triticale offers an alternate animal feed source and also has a growing potential in the human food market.

Plant breeders not only increased starch and protein yield in triticale, but protein quality has also been improved. The lysine (essential amino acid) content value is intermediate compared to wheat and rye, and slightly lower than in barley. The mineral, vitamin and micro-nutrient values are similar or superior to those of wheat. The digestible energy is slightly lower than in wheat and corn, and slightly higher than in rye and barley.

Triticale, when compared to bread wheat, has inferior flour quality traits, but does fit into the multi-grain health food industry. The flour is ground as whole grain and utilized in health food products. The food market for triticale is poorly developed.

Research indicates that newer varieties of triticale have the potential to become an important alternative feed grain in Western Canada. Triticale's high-energy value and protein quality enable it to be as effective as wheat in poultry rations. As well, feeding trial data with respect to hogs, dairy, beef cattle and sheep indicate that triticale can be considered an equivalent feed source to other commonly used feed grains such as wheat, barley and maize.

Silage quality is dependent on the developmental stage at which triticale is cut. As with most other crops, an inverse relationship exists between quality and yield, as the protein levels decline with delayed cutting.

Cutting triticale at approximately two to three weeks post- heading, or at the soft dough stage, will maximize energy and yield. Since barley can be cut at a slightly later developmental stage, the stiff dough stage, including both triticale and barley as silage crops will widen the window of harvest, thereby spreading the workload. It has been shown that the performance of growing steers was similar when fed either triticale or barley silage diets.

Although protein levels of typical cereal silage crops are quite similar, and are generally inferior to legume crops, differences in digestibility do exist in cereal silage. Triticale silage is generally considered intermediate in quality to barley and oats. Varieties that have been recently registered show improved yield and silage quality compared to that of their predecessors. However, barley still provides a slight improvement in grain and silage yield.

Under-sowing triticale to a legume, such as peas, can produce superior quality silage with improved yield potential when compared to triticale grown alone. Improved protein levels will be maintained if pea constitutes a minimum of 40 per cent of the dry matter yield, underlying the importance of a proper seeding rate. A common recommendation is to sow pea at the full rate and triticale at one-quarter of the full rate. To ensure sufficient pea yield and to reduce seed costs, it is recommended to select pea varieties that produce high dry matter yields, compete well and are small-seeded.

If winter triticale is grown as a dual-purpose crop, such as for grazing and for grain, careful management is imperative. Limited spring grazing should conclude before the stem elongation and booting stages of development. Proper grazing management, i.e. keeping rotations short with an appropriate herd size, will facilitate tiller production and maximize both grain and forage yield.

The literature is unclear on the impact of grazing on grain yield. Depending on the study, grain yield responses to grazing have ranged from negative to positive. The effect of grazing on grain yield is dependent on cultivar, environment and cultural practices. The ability of the cultivar to adapt and produce adequate grain yields subsequent to moderate grazing is more important than their forage producing capabilities. Time of grazing relative to the plant developmental stages is also important. It appears that grazing beyond the first node stage of development is not recommended. For expertise in this matter, please consult a Ministry of Agriculture provincial or regional forage specialist. A list of specialists at the regional offices can be found by searching on the Regional Services Offices interactive map.

Spring seeded winter triticale produces lush vegetative material throughout the summer and fall, providing an excellent source of leafy material for pasture. Grazing winter triticale can begin when the plant is approximately six inches tall. Winter triticale is quite productive late into the fall season. Rotational grazing and allowing a three to four week rest interval is required.

When comparing triticale, barley and oat yields across various soil zones, triticale ranks as intermediate. Barley performs comparatively well in the brown soil zones, and oats show a comparative advantage in the moister areas of the darker soil zones.

The 1,000 kernel weight for triticale is generally 20 to 30 per cent greater than it is for CWRS; therefore, seeding rates should be increased accordingly. Seeding rate is recommended to be seeded on target plant density to adjust for variations in seed size. Triticale is recommended to be seeded at 310 plants per square metre, (30 plants per square foot).

When determining nitrogen application rates, producers should consider the additional yield potential, as well as grain prices and nitrogen costs.

Triticale can be swathed at 35 per cent moisture without loss of yield, test weight or quality. However, since triticale is more susceptible to sprouting than CWRS, straight-combining is recommended. Triticale is quite resistant to shattering and lodging, which bodes well for the straight-cut method of harvest. Combine adjustments should be similar to those used for wheat.

Including winter triticale in rotation offers unique advantages. Sowing a winter crop will alter weed pressures and workload distribution. Winter triticale matures approximately the third week in August, which is one week later than winter wheat and two weeks later than fall rye.

Production practices for winter triticale parallel those of winter wheat and fall rye. Seeding operations should be completed by the first week of September because the cold tolerance of triticale equals that of winter wheat and plants may take longer to establish. Early seeding is recommended. Seeding rate should account for over wintering mortality.

Spring triticale offers an excellent alternative to other spring cereals for both feed and forage, and a small human consumption market. Depending on the cultivar, spring triticale requires 103 to 107 days to mature; therefore, it should be sown as early as possible.

Triticale is similar to other small-grain cereals in susceptibility to insects.

The diseases affecting triticale are quite similar to those affecting wheat and rye crops. Although triticale is resistant to leaf rust, stem rust, common bunt and smut, it is susceptible to other leaf spot diseases of cereals. Proper rotation with non-cereal crops is required to reduce disease pressure.

Triticale is similar to wheat in its susceptibility to fusarium head blight. The mycotoxin deoxynivalenol (known as DON or vomitoxin) may be present stored or fusarium, damaged kernels.. DON may lead to reduced feed intake and subsequent poor performance.

A laboratory analysis is required to detect the presence and level of DON. Different livestock species react differently to DON infested feed. Hogs are quite sensitive, especially pregnant or weanling stock. Guidelines set out by AAFC stipulate tolerance levels at 1 part per million (ppm) for hogs and dairy cattle, and 5 ppm for beef cattle, sheep and poultry. Poultry appear to be most tolerant of DON. These guidelines refer to a complete feed ration that is based on a 100 per cent dry matter basis.

Triticale as a grain feed can be used as a substitute for other commonly used cereals. Producers should be aware, however, that because of unsecured supplies, feedlots and feed mills may be hesitant to change the formulations required by the inclusion of triticale.

Barley is usually the crop of choice for greenfeed, silage or grain feed in Saskatchewan. However, when comparing barley, oats, and triticale yield across the different soil zones, triticale performs comparatively well in the dark brown and possibly thin black soil zones. Another feature of triticale over barley is that it is less susceptible to common leaf diseases.

As a greenfeed or silage, the quality of triticale is intermediate to barley and oats. Although spring triticale produces superior quality forage over its winter counterpart, winter triticale offers unique opportunities such as fall grazing, weed cycle interruption, soil conservation and workload distribution.

If growing triticale for the food market, producers should establish a market beforehand.