Seed quality can be adversely affected and result in short supply good quality seed for the following year. Development of a crop can be hindered by insufficient growing degree days (GDD) or by an early frost impacting crops during a vulnerable growth stage. These events can lead to the harvest of frost-damaged grain and thus uncertainty questions regarding seed quality for planting in the upcoming year. Questions may arise such as, "How will the frost affect seed germination and seedling vigour?"

Different crop types will suffer different degrees of damage due to the way crops develop during the growing season. If food reserves within the seed are adversely affected, the quality for future propagation will be reduced. If good quality seed is in short supply, it may be advisable to secure your seed supply as soon as possible and test for seed quality.

Frost damaged seed can be categorized in four different categories depending on the degree of frost damage:

The effect of the damage (Type B, C and D) described above can impact crop germination and emergence.

Research has indicated that bran frosted wheat could be used for seed, provided the 1,000 kernel weight was close to normal, and germination levels are high (Type B). Damaged seed showing significant shrunken or shrivelled kernels should not be used for seed (Type C and D).

Frosted seed was more apt to suffer loss due to seed rots and seedling blights. Therefore, seed treatment is highly recommended if planting frost damaged seed. However, this becomes an additional cost to the farmer. Furthermore, a poor plant stand is less competitive with weeds, which requires diligent weed control during the growing season. Deep seeding of frost damaged seed led to reduced emergence and seedling vigour.

Research undertaken by Dr. Gusta and Agriculture and Agri-Food Canada (AAFC) though the 1990s showed the negative results of frost damage on quality of seeds. 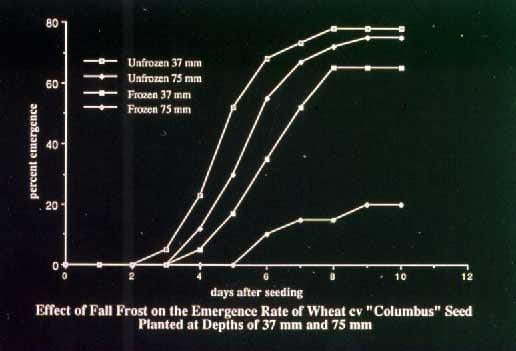 Dr. Gusta's findings show that germination may be acceptable but vigour is especially important. Vigour can be described as the ability of a seed to germinate and grow rapidly under a wide range of field conditions. Deep seeding causes additional stress on frozen seed so it is vitally important to have a vigour test conducted and take action to mitigate stresses by using seed treatment, shallow seeding or any other agronomic practice to hasten emergence. 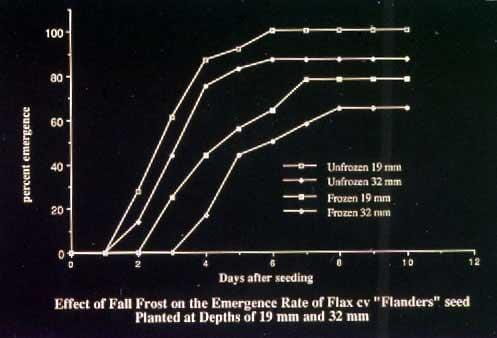 After 10 days, the frozen flax seed produced only 65 per cent of the number of seedlings compared to unfrozen seed. Seedling emergence also occurred over a longer period which would contribute to non-uniform plants in the field, as well as uneven maturity.

The U of S results also showed that canola seedlings had the most significant frost injury compared to flax and wheat, as shown in Figure 3. Whether sown at 1.9 cm (0.75 in.) or 3.8 cm (1.5 in.), very few seedlings emerged from the frozen seed lot and emergence occurred over eight days. The plants were also small and spindly. This was likely due to the fact that canola was the smallest of the seeds tested and, consequently, most subject to reductions in energy reserves.

Testing for germination and vigour

Farmers are encouraged to use the best seed possible, preferably non-frosted seed. A germination test is a must when there is possible frost injury. Before you begin, consider that "seed of most wheat varieties has a natural dormancy that causes low germination for several weeks after harvest." The grain should be given a cold treatment before testing, or germination tests should be delayed for about four weeks after harvest." (Shroyer, Mikesell, Paulsen, Spring Freeze Injury To Kansas Wheat, Kansas State University, March Frost Damage to Wheat).

Any crop treated with glyphosate for pre-harvest weed control should not be used for planting seed as poor seedling vigour and emergence can occur.

Germination can decrease in the bin over the winter, especially if the seed was green, frost or mechanically damaged, or had high moisture content at harvest. For seed lots of questionable quality in the fall, it is a good investment to conduct another germination test in the spring to make sure the quality did not decrease further in the bin.

Increasing the seeding rate will compensate for low germination to a certain extent; however, if the reduced germination was a result of disease, an increased seeding rate may result in more disease inoculum in the field.

Testing for germination serves as an indicator for overall seed quality but will not determine if the seed is carrying specific seed-borne diseases. Therefore, it is also recommended to have seed tested at an accredited laboratory to assess the levels of seed-borne pathogens. Preferably, buy only certified seed that has known good quality but keep in mind that "certified seed" (according to The Seeds Act) has to meet standards for germination and purity but not for all diseases.

It is recommended to ask to see a copy of the seed lab report before purchasing seed to find out whether testing for seed-borne diseases was also conducted.

It is important to talk to the lab before submitting the seed sample to confirm which pathogens will be identified, the price for the test, the procedure used and how to submit the sample.

Seed-borne disease testing is not yet considered an accredited test (i.e. as recognized by the Canadian Food Inspection Agency) but labs are required to follow a standard protocol to provide consistent and accurate information to their clients.

There is an on-going attempt by people in the industry to provide suggestions for "safe" levels of seed-borne diseases in various seed cultivars.

Ultimately, seed choice is the farmer's decision and will depend on his or her situation, which may be influenced by a variety of factors affecting risk, including:

Frost-damaged or diseased seed is often shrunken or discoloured. Cleaners and colour sorters can be used to remove some diseased or damaged seed. It is recommended that producers have their seed cleaned and sized to allow for consistent flow in seeding equipment.

Selecting good quality seed is integral to a healthy crop-but managing for crop health must continue throughout the growing season.

The farmer must make plans to scout the crop early and often during the season to identify problems and implement management practices if necessary.