A number of pages on the Government of Saskatchewan's website have been professionally translated in French. These translations are identified by a yellow box in the right or left rail that resembles the link below. The home page for French-language content on this site can be found at:

Software-based translations do not approach the fluency of a native speaker or possess the skill of a professional translator. The translation should not be considered exact, and may include incorrect or offensive language. The Government of Saskatchewan does not warrant the accuracy, reliability or timeliness of any information translated by this system. Some files or items cannot be translated, including graphs, photos and other file formats such as portable document formats (PDFs).

Any person or entities that rely on information obtained from the system does so at his or her own risk. Government of Saskatchewan is not responsible for any damage or issues that may possibly result from using translated website content. If you have any questions about Google™ Translate, please visit: Google™ Translate FAQs.

Manufacturing sales in Saskatchewan rose 5.4 per cent (seasonally adjusted) between November 2016 and December 2016, the highest percentage increase among the provinces.  Nationally, sales were up 2.3 per cent.

“This marks the second straight month of increases in manufacturing sales,” Economy Minister Jeremy Harrison said.  “It is one of the most diverse sectors of the economy that exports products to clients all over the world.” 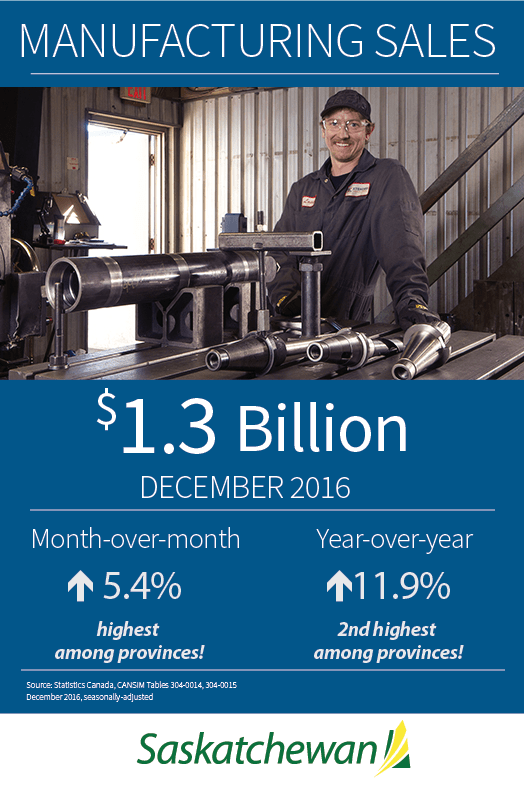 On a year-over-year basis, sales were up 11.9 per cent (seasonally adjusted) in Saskatchewan, the second highest among the provinces and well ahead of the 4.1 per cent posted nationally.

View all contacts in the directory

We need your feedback to improve saskatchewan.ca. Help us improve