Natural disturbances such as fire, wind, flood, insects and disease outbreaks are an important part of the natural life cycle of forests, especially the boreal forest. These disturbances change the environment by changing the amount and distribution of forest stand types across the landscape, diversify the age class distribution of forest stands and facilitate the renewal of the forest.

Although these disturbances are natural forces shaping the boreal forest, there is a need to maintain and protect forests and other values found within the forest. There is a cost to deploying resources to protect the forest from wildfire, insects and disease, and there is a cost to lost timber for forest products. Unpredictable disturbances create uncertainties in terms of forest product availability, and can have a significant effect on sustainable forest management.

Spruce budworm, jack pine budworm, forest tent caterpillar and large aspen tortrix are all cyclic in their outbreak behaviour. Generally, populations of these insects increase and reach outbreak levels within expected and predictable timeframes. These pests feed on tree foliage and may cause tree mortality after repeated annual attacks during outbreaks.

The spruce budworm cycle is relatively long, and peak outbreaks are expected to occur roughly 35 years apart. A spruce budworm outbreak that peaked in 2002 poses no current threat to sustainable forest management. 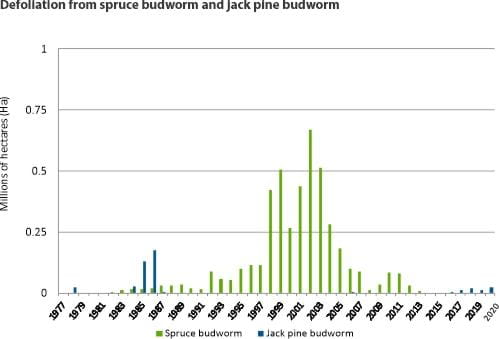 Hardwood defoliation is primarily caused by forest tent caterpillar cycles approximately every 10 to 12 years, with outbreaks lasting three to five years. The pattern has been quite regular with outbreaks occurring in 2001 to 2007 and again from 2013 to 2017. The outbreak in the early 2000s was not aerially mapped (and does not appear on the graph below); however, disturbed areas are documented in a separate report produced by BioForest Technologies in 2015. The current outbreak that reached a peak in 2017 has now generally collapsed throughout the province. 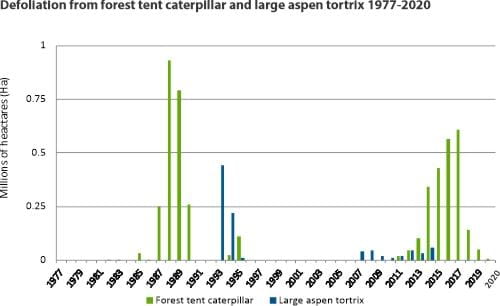 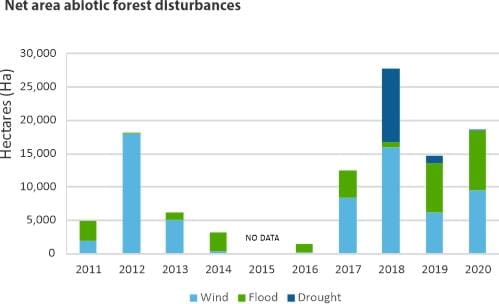 The boreal forest ecosystem is driven by natural disturbances. Boreal species have evolved over time to cope with, and even require, periodic disturbance as part of their natural life cycles. Wildfires are a natural part of the forest ecosystem. The area burned from year to year varies and is significantly affected by weather. Autumn and spring rains, timely summer precipitation, and winter snowfall will significantly reduce wildfires and limit their spread.

While the number and size of catastrophic wildfires in some North American jurisdictions has increased over the last five years, 20 years of available data do not show any statistically significant increasing trend in Saskatchewan. However, some variation is occurring in the expected seasonal trends during a wildfire season. Climate change is expected to extend wildfire seasons with potentially more extreme weather events occurring within a wildfire season that could support more severe wildfires.

The Government of Saskatchewan uses modern technology and decision-making systems to detect, monitor and suppress wildfires, and has dedicated resources to help promote FireSmart principles. Wildfires that threaten human life and communities are always the government's top priority, followed by protection of critical public infrastructure, major industrial infrastructure, commercial timber, remote structures and natural resources. Wildfires in low-value timber areas and non-commercial northern forests are considered for initial attack and sustained action based on an assessment of values and estimated financial cost. Some wildfires are allowed to act as a necessary and natural process on the landscape. 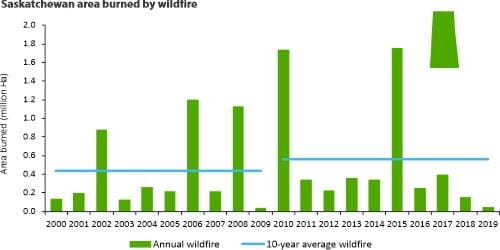 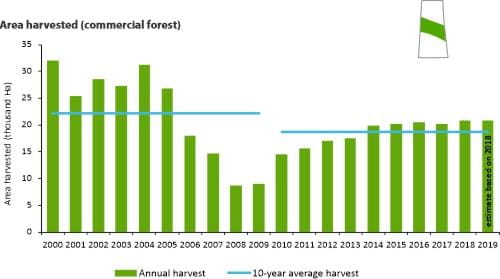 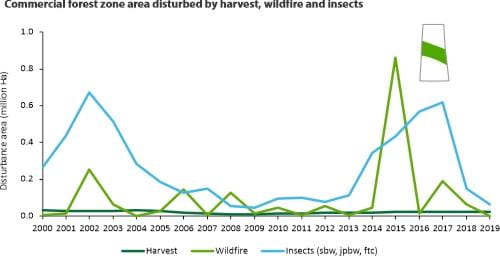