Indigenous involvement in the forest sector

The Government of Saskatchewan is committed to promoting the use of provincial forest resources in an economically, socially and environmentally sustainable manner. Indigenous involvement is critical to the success of the forestry sector in Saskatchewan.

Indigenous people represent approximately 27 per cent of the forestry sector workforce in Saskatchewan, which is by far the largest of any province. 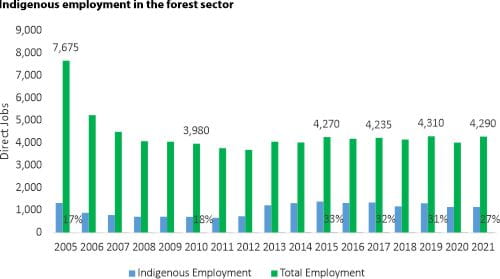 The annual allowable cut allocated to Indigenous businesses indicates the level of economic involvement and benefits derived from the forestry sector by Indigenous people. NorSask Forest Products, located in Meadow Lake, is the largest First Nations-owned and operated sawmill in Canada. Indigenous allocations dropped slightly from 2019 to 2020 because the annual allowable cut (AAC) declined during the same period due to major forest fires, which disproportionately impacted certain Indigenous allocation holders.