For more than 30 years, Mineral Surface Lease Agreements (MSLA) have provided the foundation for the development of supportive relationships between northern communities, mining operations and the Government of Saskatchewan.

The main purpose of the MSLA is to provide long-term land rental and contribute to economic prosperity for northern and all of Saskatchewan. The ministries of Government Relations and Environment work together to administer these agreements.

There are currently 14 Mineral Surface Lease Agreements in effect, six of which have active mining, milling or maintenance operations. In 2018, an estimated $134.8 million was spent on exploration for uranium, gold and base metals in northern Saskatchewan. 2,400 employees worked in the areas of mining, milling and maintenance (2017). Of those employees, 41 per cent were Indigenous.

Since 1991, northern mining operations have paid $7.5 billion to northern employees and northern goods and services suppliers.

In 2017, northern mining operations paid $89.7 million in wages to their northern employees. They also purchased 51 per cent of their total goods and services from northern businesses and joint ventures. This makes for a total of $261.3 million spent in the north that year.

Many of the main suppliers are businesses owned by Indigenous people or northern communities.

Each lease also requires the mine operator to have a human resource development agreement, administered by the Ministry of Immigration and Career Training. These agreements focus on opportunities for northern training, employment and job advancement.

The agreements apply to mines operating on Crown land in the Northern Saskatchewan Administration District (NSAD), which is home to over 40,000 people. The agreements apply through all stages of a mine's life, from first construction through operations to the final reclaiming of the land. 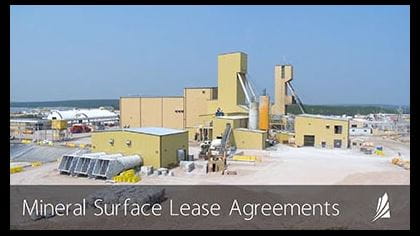