Saskatchewan has a wealth of resources that is the envy of nations – agriculture, potash, uranium and other critical minerals, as well as oil. And the world is watching as Saskatchewan achieves technological firsts in crop science, plant protein, agricultural equipment and renewable energy.

The province has a diversity of resources that has enabled it to weather global economic cycles. In fact, the province has seen record population, employment, investment and export growth in the past decade.

Although global commodity price declines have affected Gross Domestic Product (GDP) in recent years, Saskatchewan has experienced steady GDP growth over the past decade. The province posted a GDP of $77.3 billion in 2020.

Saskatchewan has experienced a remarkable growth in investment in the past decade. Between 2010 and 2020, Saskatchewan is expected to reach an estimated $173 billion in new capital investment. 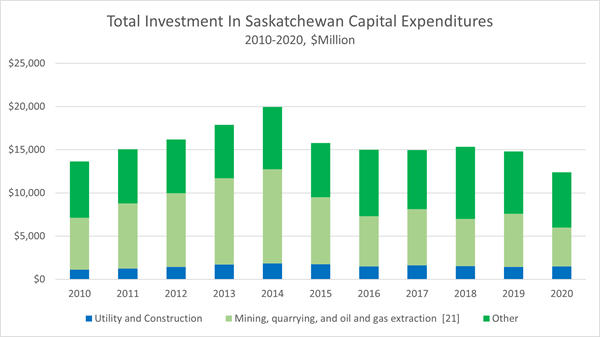 The Government of Saskatchewan is committed to creating a fiscally stable economy. Saskatchewan maintains strong credit ratings with both Moody's Investor Services (AA1 credit rating) and Standard & Poor's (double A credit rating). In addition, the Canadian Federation of Independent Business gave Saskatchewan an A grade for its red tape reduction efforts - the highest grade possible. The government puts a priority on making regulations clear, transparent and streamlined to help businesses get up and running quickly and keep costs down.

Learn why international companies are investing in Saskatchewan and buying our products.